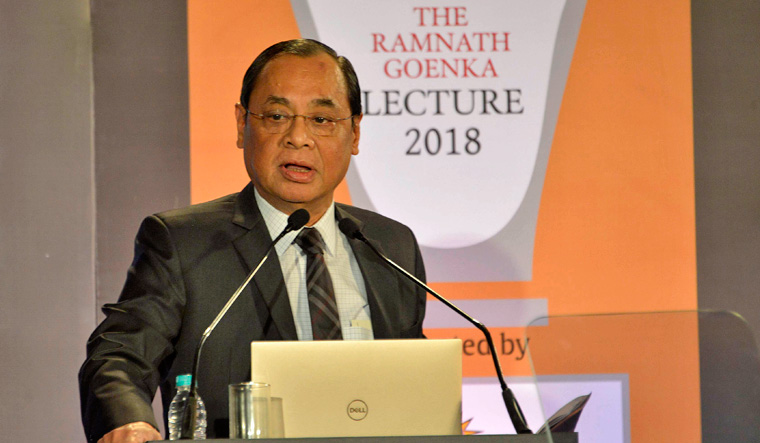 The statement of assets of the new chief justice of India presents a picture of an extremely frugal life.

Ranjan Gogoi, who took oath as the chief justice of India on Wednesday, has disclosed that he has bank savings amounting to Rs 6.5 lakh, fixed deposits worth Rs 16 lakh, jewellery weighing approximately 150gm, which his wife got at the time of their wedding, and that he owns no vehicle.

According to the disclosure of assets made by Chief Justice Gogoi, he does not have any investments in shares or mutual funds. There is one LIC policy valued at Rs 5 lakh that Gogoi took in 1999, the matured proceeds of which form the bulk of his bank balance.

Chief Justice Gogoi had declared that he owns no jewellery, and that his wife had received 150 grams of jewellery at the time of their wedding. Gogoi states that he has purchased jewellery worth Rs 1.6 lakh in anticipation of the marriage of his children; he has gone to the extent of specifying that the money came from premature encashment of a fixed deposit valued at Rs 3 lakh.

As per the statement of assets, Chief Justice Gogoi had a self-acquired plot of land measuring one Katha, 10 Lessa at Beltola in Guwahati, which he had bought for Rs 1.10 lakh in 1999. This plot, as per Gogoi's declaration, was transferred by a sale deed dated June 6, 2018 and executed at Guwahati in favour of Manish Das for an amount of Rs 65 lakh, out of which one per cent has been deducted by the purchaser on account of TDS.

The only property that Chief Justice Gogoi currently owns was gifted to him by his mother. The land—where a house once stood, but the building has been demolished since—in the village of Japorigog Mouza Beltola in Kamrup district, Assam, has been in possession and occupation of Gogoi since 1978.

It was transferred to him and his wife, Rupanjali Gogoi, by his mother, Shanti Gogoi, by a registered deed of gift dated June 10, 2015.

The new chief justice of India has led by example in making a declaration of his assets, in pursuance of the resolution adopted in the full court meeting of the Supreme Court on May 7, 1997. Despite the resolution, only 10 out of the 24 sitting Supreme Court judges have declared their assets. The others who have done so are Justices Madan B. Lokur, Kurian Joseph, A.K. Sikri, S.A. Bobde, N.V. Ramana, Arun Mishra, R. Banumathi, A.M. Khanwilkar and Ashok Bhushan.

There has been a demand for the judiciary to become more transparent in the light of growing allegations of corruption against judges. In 2007, a petition was filed in the Delhi High Court seeking disclosure of assets by judges under the Right to Information Act. The Supreme Court countered the petition in the Delhi High Court, which ruled that judges should declare their assets.

On August 26, 2009, the Supreme Court passed another resolution in a meeting of the full court that the judges would voluntarily declare their assets, and this would be made public.