The Russian president will arrive in New Delhi on October 4 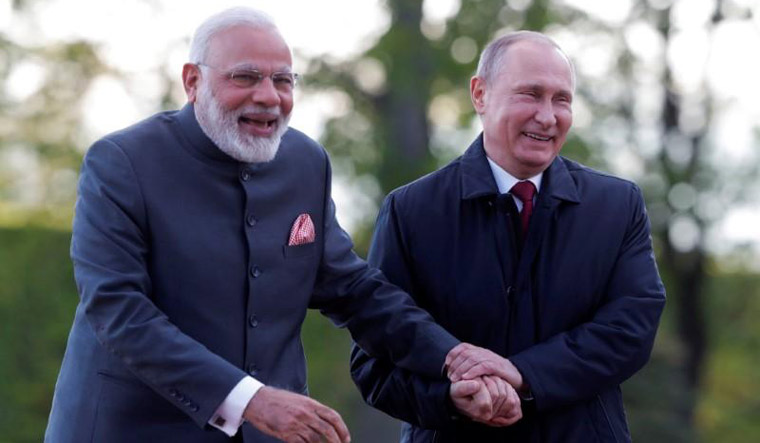 As all eyes will be on the likely announcement of the S-400 air defence missile systems deal during a meeting between Prime Minister Narendra Modi and Russian President Vladimir Putin on Saturday, the ministry of defence is also keen to conclude the multi-billion agreement to procure 200 Kamov Ka-226T helicopters through a joint venture between the Russian Helicopters and the HAL.

Putin will arrive in New Delhi on October 4 to take part in the 19th India-Russia annual bilateral summit. Besides the announcement on S-400, expectations are high on agreements for four Talwar-class frigates and licensed production of AK 103 assault rifles with Ordnance Factories Board (OFB) during the Modi-Putin meet.

However, Kamov Ka-226T helicopters, the first major Make In India programme—announced first in December 2014 and an internal government agreement for which was inked in October 2016—is still in limbo for the last four years. It is believed that New Delhi was not satisfied with the price quoted by the Russian side. This is considered to be one of the reasons for holding back a formal joint venture between the Russian Helicopters and the HAL.

In December 2014, after months of deliberations, India and Russia agreed to manufacture the Kamov Ka-226T helicopter in India. In the contract for 200 helicopters, 60 will come under fly-away condition from Russia and the remaining 140 will be built in India.

The twin-engined Kamov Ka-226T will replace the single-engine Cheetah/Chetak. Army is in desperate need for light utility helicopters—a lifeline for soldiers posted at the world’s highest battlefield on the inhospitable Siachen Glacier in the Himalayas. Army's efforts for having these light utility helicopters went through three cancellations and the latest was in 2014. Army is depending on its vintage helicopter fleet of Cheetah/Chetak and they have lived way beyond the threshold by more than 12-15 years. These copters were purchased from France and inducted into the Indian Army over 40 years ago in 1971.

"In May, the Army issued a fresh RFP (Request for Proposal) after the HAL raised several objections to Army's first RFP for these light utility helicopters. A six month-timeframe has been given to the vendor to respond to it (RFP). We are hopeful to make some headway in the coming days," said a defence ministry official. Two sides (Russian and the HAL) have even identified a site near Bengaluru to set up a facility for joint production of these helicopters.

Army, IAF, Navy and the Coast Guard presently have a fleet of around 430 Cheetah/Chetak helicopters, which were based on the 1950s’ designed Alouette Aérospatiale 315B Lama of France. Officials claim that the airframe life of the light utility helicopter is about 4,500 hours, but most of the Cheetahs that the Army possess, have logged over 6,000 flying hours. The engine life of the chopper is 1,750 hours and most of them have gone past that too.