Doctors have implanted a pulmonary valve through a non-surgical procedure 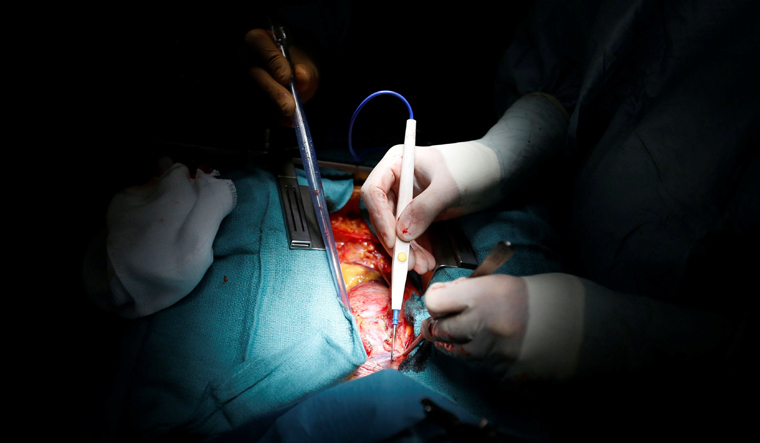 Doctors at PGIMER have successfully implanted a pulmonary valve in a 25-year-old congenital heart patient through a non-surgical procedure.

The new technique eliminated the need for an open heart surgery in the patient who had already had two such procedures.

The transcatheter pulmonary valve replacement (TPVR) was the first such procedure carried by the institute in a patient with a known case of Tetralogy of Fallot (TOF), for which he was first operated on at an age of 11 months, a PGIMER press release said.

TOF patients have had prior surgery but can have a leaky or narrowed pulmonary valve, especially if they have undergone a prior surgical replacement.

"We have many postoperative patients of TOF who develop right heart failure on long-term follow-up due to pulmonary regurgitation, Rohit said.

He said that TPVR in such patients decreases morbidity and mortality risk, and the long-term results remain comparable to surgically implanted valves.

Due to severe pulmonary regurgitation and right heart enlargement, the male patient underwent another open heart surgery in 2009 when a pulmonary valve was implanted.

Around 11 years after the second surgery, the implanted valve got dysfunctional.

Open-heart surgery for the third time would have been a technically challenging procedure, hence the patient was taken up for a percutaneous procedure, the release said.

The procedure was successful and the patient has been discharged home and is doing well.

TPVR is used to replace the pulmonary valve non-surgically, decreasing the number of heart surgeries a patient will need over their lifetime.

In the procedure, a catheter is placed through a small incision into the femoral vein (in the groin) or the jugular vein in the neck.

A compressed tissue heart valve is placed on a balloon catheter, advanced through the vein to the heart and is positioned directly inside the diseased pulmonary valve.

Once in position, the balloon is inflated expanding the stent and the valve is secured in place. The new valve immediately begins to work. The catheter is then removed.

A second TPVR procedure was done in a 56-year-old female, also a known case of TOF who underwent intracardiac repair at an age of 35 years.

PGIMER doctors noted that the transcutaneously implanted pulmonary valve, besides being less traumatic, has a life similar to surgically placed valve.

The short and long-term outcomes of the valve are