Test your heart health by climbing four flights of stairs

Stairs test is an easy way to check your heart health 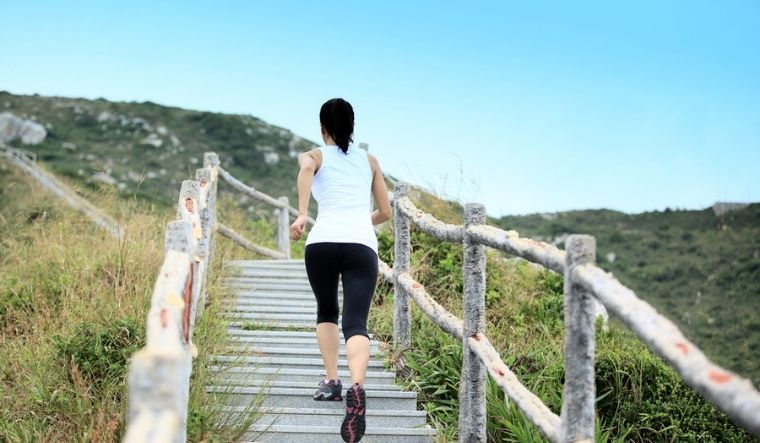 Climbing four flights of stairs in less than a minute indicates good heart health, according to research presented at EACVI—Best of Imaging 2020, a scientific congress of the European Society of Cardiology (ESC).

While climbing a stair you push down to lift your entire body up a stair. This activity can not only increase the strength of the body muscles but also indicate the condition of their heart health.

"The stairs test is an easy way to check your heart health," said study author Dr. Jesús Peteiro, a cardiologist at University Hospital A Coruña, Spain. "If it takes you more than one-and-a-half minutes to ascend four flights of stairs, your health is suboptimal, and it would be a good idea to consult a doctor."

This study was conducted to examine the relationship between a daily activity—i.e. climbing stairs— and the results obtained from exercise testing in a laboratory. "The idea was to find a simple and inexpensive method of assessing heart health," said Dr. Peteiro. "This can help physicians triage patients for more extensive examinations."

The study included 165 symptomatic patients referred for exercise testing because of known or suspected coronary artery disease. Symptoms included chest pain or shortness of breath during exertion. Participants walked or ran on a treadmill, gradually increasing the intensity, and continuing until exhaustion. Exercise capacity was measured as metabolic equivalents (METs). After resting for 15 to 20 minutes, patients were asked to climb four flights of stairs (60 stairs) at a fast pace without stopping, but also without running, and the time was recorded.

The researchers analysed the relationship between METs achieved during exercise testing and the time it took to climb four flights of stairs. Patients who climbed the stairs in less than 40-45 seconds achieved more than 9-10 METs. Previous studies have shown that 10 METs during an exercise test is linked with a low mortality rate (1 percent or less per year, or 10percent in 10 years). In contrast, patients who took 1.5 minutes or longer to climb the stairs achieved less than 8 METs, which translates to a mortality rate of 2-4 percent per year, or 30 percent in 10 years.

Dr. Peteiro noted that the correlation between the stairs time and exercise capacity (i.e. METs) would be similar in the general population. But the corresponding mortality rates and heart function by imaging would be more favourable than for patients with symptoms and suspected or confirmed coronary artery disease.