The Chinese scientist was sentenced to three years imprisonment 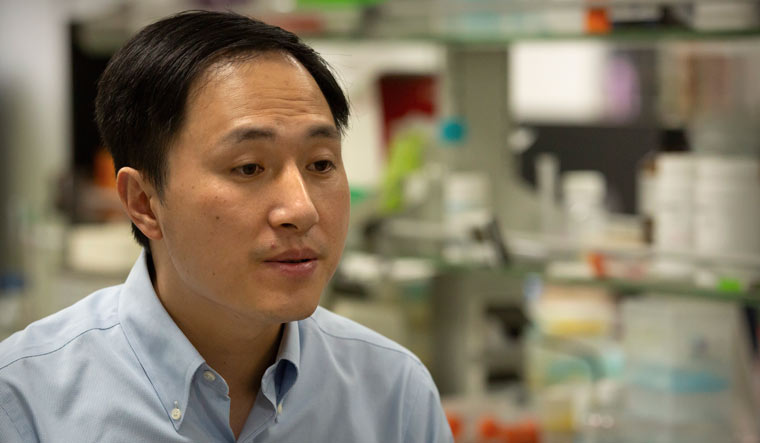 Anything that offers a semblance of preventive or cure for HIV and AIDS is of great interest to Dr Diwakar Tejaswi, an AIDS expert and senior physician based in Patna. So when Chinese scientist He Jiankui presented gene-edited twin girls, Lula and Nuna, making them immune to HIV infection in future, Tejaswi was quite excited. It  reminded him of Timothy Ray Brown, a patient from Berlin, who is the first human to be cured of HIV.

''Brown was miraculously cured because of Delta 32 homozygosity, a type of natural gene mutation that blocked the entry of HIV virus into his CD4 cells. So the HIV cells couldn’t replicate inside the CD4 cells,'' Tejaswi says.

According to him, Jiankui’s research looked promising. The Chinese scientist had created babies who are immune to HIV by editing their CCR5 gene which acts as a doorway to the virus.

However Jiankui overlooked several ethical and legal issues during the process and had to pay a huge price for that. He was sentenced to three years imprisonment and fined three million Yuvan.

Jiankui had also carried out similar experiments on a third embryo later. The three genetically edited babies have been kept under medical supervision.

The news of Jiankui’s imprisonment has elicited strong reactions from the scientific community. “I think gene editing on human embryos is very dangerous. The experiment was done in an unethical manner,” said Dr Rama Rao Amara, lead researcher in an HIV vaccine project at Yerkes National Primate Research Centre of Emory University in Atlanta.

The South China Morning Post had reported that Jiankui had recruited seven heterosexual couples who were willing to have the experiment performed on their babies. Among the couples recruited, all the men were HIV positive while the women were not. “Especially, in this case of HIV positive heterosexuals, the transmission of infection to babies can easily prevented by simply treating the infected partner with anti retrovirals,” explained Amara, in an exclusive interview to THE WEEK. “When the viral copies drop below 1,000 per ml blood, the transmission does not occur,” added the 48-year-old who hails from Nellore district of Andhra Pradesh.

''The newer drugs like Dolutegravir even go to the next stage of getting Target Not Detected (TND), which means not a single copy per ml in HIV viral load testing. Eventually no child will thus be born with HIV if mother is treated well during pregnancy and breastfeeding,'' said Dr Ishwar Gilada, president of the AIDS Society of India and governing council member of the International AIDS Society. Interestingly, of the HIV infected people who are on anti-retroviral therapy across the globe, more than 92 per cent take ART manufactured in India.

“’Jiankui's experiment was one with utmost absurdity,” said Gilada. “Firstly any researcher has to follow the ethical standards as well as law of the land. Secondly, he had even cheated his medical colleagues,” he added.

It is a proven fact that CCR5 co receptor blockage, with naturally occurring Delta 32 homozygosity, leads to prevention of HIV cure. However, deliberate manipulation of human genome involves many ethical issues, said Tejaswi. “And we don't know its long term effect on human beings,’’ he added.

Zhang Renli and Qin Jinzhou, two other scientists who assisted Jiankui in performing these experiments, have also been sentenced to jail. The scientists had acted “in the pursuit of personal fame and gain’’ and “disrupted medical order”, the court said, reported Xinhua news agency. “They’ve crossed the bottom line of ethics in scientific research.”

In an interview to the Associated Press in November 2018, Jiankui had said, “I understand my work will be controversial, but I believe families need this technology and I’m willing to take the criticism for them.’’ The interview had elicited criticism from the scientific community. In a statement, the Chinese Academy of Science said, “Under current circumstances, gene editing in human embryos still involves various technical issues, might lead to unforeseen risks, and violates the consensus of the international scientific community.’’

Jiankui had been under state surveillance after the video surfaced and was forced to discontinue his research midway.