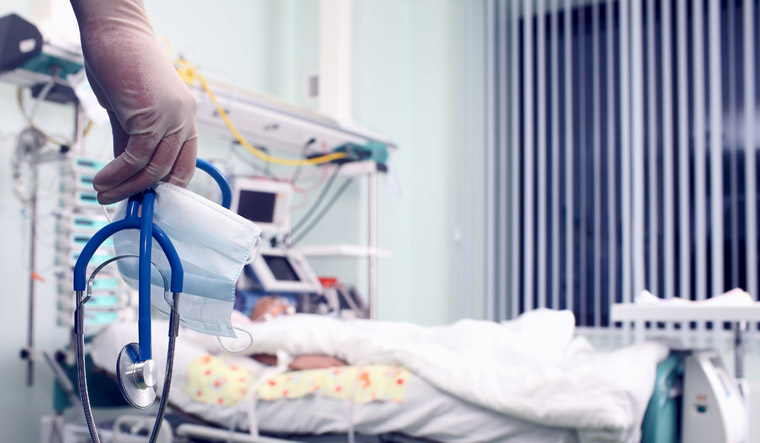 Doctor gives up after failure of patients therapy | Shutterstock

A draft legislation seeking to punish people who assault on-duty doctors and other healthcare professionals by imprisoning them for up to 10 years, has been finalised and will be made public soon for feedback, Union Health Minister Harsh Vardhan said on Tuesday.

Those "grievously hurting" doctors and other healthcare professionals in clinical establishments may face imprisonment between three and ten years and could fined between Rs 2 to Rs 10 lakh, officials sources said of the provisions in the draft bill.

The draft bill says those commissioning violence or causing damage to the property of a healthcare facility can be imprisoned for six months to five years and fined between Rs 50,000 and Rs five lakh, they said.

"The Central law, a long-standing demand of the medical fraternity, which seeks to prohibit violence against doctors and other healthcare service personnel and damage to property of clinical establishments has been finalised. We will soon put it in public domain for comments and feedback," Vardhan said.

"Once finalised, we will take it to the Cabinet," he added.

The draft bill also provisions for compensation which could be twice the market value of a property damaged and Rs 1 lakh to Rs 5 lakh for being assaulted or hurt, sources said.

In case of non-payment of compensation by a convict, the amount may be recovered as arrears of land revenue under the Revenue Recovery Act 1890, the sources said.

According to the draft bill, violence means an act which causes any kind of hurt, intimidation, obstruction or endangers the life of any healthcare service personnel in discharge of duty within the premises of a healthcare facility. Violence also includes damage or loss to property or documents in a clinical establishment.

The Health Ministry had entrusted an eight-member sub-committee, comprising its officials and representatives from the Medical Council of India, Indian Medical Association, the All India Institute of Medical Sciences' Resident Doctors Association and an experienced person from the Bureau of Police Research and Development, with the task of drafting the bill.

The sub-committee was constituted after a 10-member panel set up by the Health Ministry looked into the "pros and cons" of bringing such a central legislation.

The draft legislation has been approved by the health minister.

In June, resident doctors across the country held protests and went on a strike against a brutal attack on their colleagues by the relatives of a patient who died during treatment in West Bengal.

It was at that time when the demand for a comprehensive central legislation to check violence against doctors and other medical professionals at hospitals gained currency.

Health Minister Vardhan, that time, had written to all chief ministers to consider enacting a specific legislation for protecting doctors and medical professionals, and also attached a copy of the draft provided by IMA the Protection of Medical Service Persons and Medical Service Institutions (Prevention of Violence and Damage or Loss of Property) Act, 2017.

He had asked them to enforce the provisions of the Indian Penal Code, the Criminal Procedure Code with vigour in states where no such law was prescribed and take strict action in cases of assault against doctors.