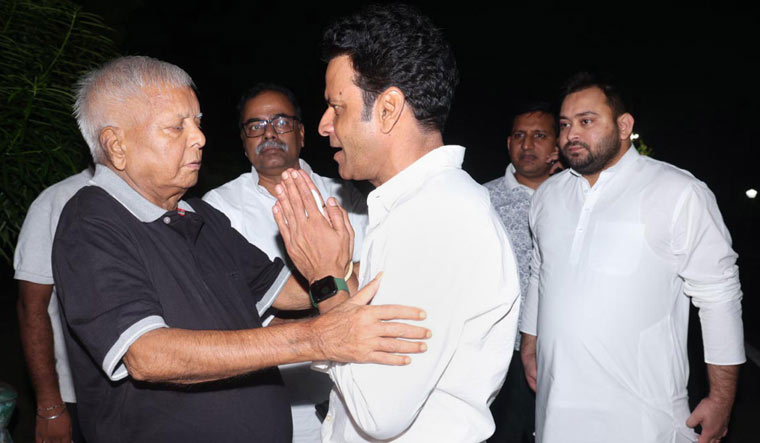 "You are our real hero,” Bihar's most colourful politician Lalu Prasad was told by actor Manoj Bajpayee, a son of the soil whose critical and commercial success is a stuff of legend in the Hindi film industry.

Bajpayee walked down to Prasad's 10, Circular Road residence in Patna late on Saturday evening, while people got to know about the meeting between the two crowd pullers after Tejashwi Yadav, the RJD president's son and the state's deputy chief minister, shared the information on social media.

In photographs and videos of the memorable evening, Bajpayee, who has remained true to his roots in West Champaran district, can be seen chatting with the ailing septuagenarian in fluent Bhojpuri.

A visibly pleased Prasad, dressed in a plain tracksuit, gave a glimpse of his earlier self when he showed Bajpayee around to the cow shed maintained inside the government bungalow.

Elsewhere, the actor, who has three National and four Filmfare awards under his belt, also met the state's Art and Culture Minister Jitendra Kumar Rai.

Rai, who belongs to Prasad's party, tweeted that discussions included prospects of a film city in Bihar.

Meanwhile, Bajpayee, whose love for his roots had led him to convince the makers of Shool, one of his most memorable works, to shoot in Champaran, seems to have decided that it was time to sit back and relax.

"Feel like a small kid whenever I start from Patna to my village Belwa! So many memories from the childhood & my school! Most beautiful place in the world for me!" tweeted Bajpayee, sharing a 20-second video of his car ride.