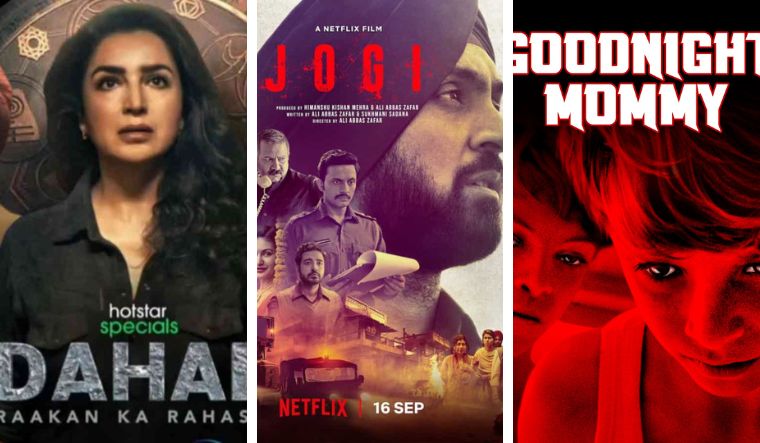 The second week of September brings a few movies and series—from a supernatural thriller to one based on the Vyapam scam—on streaming platforms. Here is a quick look at what's releasing on Netflix, Amazon Prime Video, Disney plus Hotstar and other platforms this week.

The eagerly-awaited supernatural thriller series is set in a fictional village with a temple that legends say can unleash a deadly curse when harmed. The series directed by Vikranth Pawar features Tisca Chopra in the lead. “An IAS officer (Chopra) sets out on a mission to battle age-old superstitions that shroud the village in the face of mysterious killings and disappearances,” the official synopsis read. The nine-episode series also features actors Rajesh Tailang, Mukesh Tiwari, Saurabh Shukla, Ankur Nayyar, Rohan Joshi, and Lehar Khan.

The Diljit Dosanjh-starrer based on the 1984 Delhi riots revolves around three friends. Directed by Ali Abbas Zafar, the film is set in Delhi and unravels the story of courage in the times of adversity. Dosanjh, who has previously appeared in Hindi films such as Udta Punjab, Soorma and Good Newwz, said working on Jogi has been one of his most fulfilling experiences as an actor. Jogi also features actors Kumud Mishra, Mohd Zeeshan Ayyub, Hiten Tejwani and Amyra Dastur.

The psychological horror film stars Naomi Watts, Cameron Crovetti, and Nicholas Crovetti in the lead roles. It is a remake of the Austrian movie of the same name. The film revolves around twin brothers and their mother who gets cosmetic facial surgery done. Her face is covered with bandages, and the children suspect she is not their real mother after things begin to go wrong in the house.