She will be seen along with Bachchan in 'Goodbye' 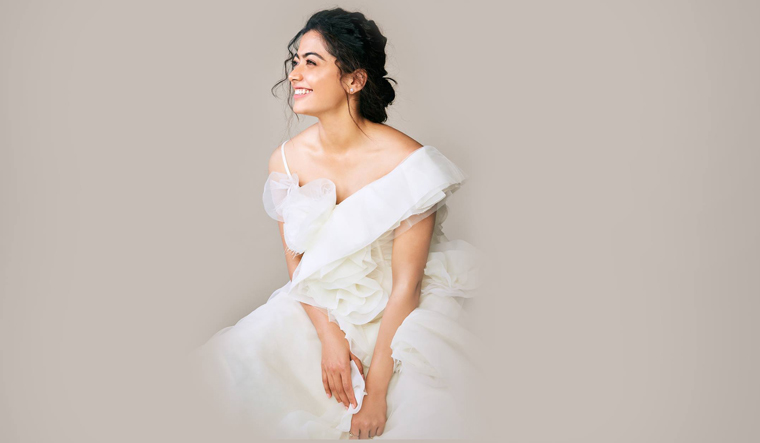 Actor Rashmika Mandanna, on Tuesday, said her choices as an artiste have always been governed by her gut feeling.

The 26-year-old actor, who predominantly works in Telugu and Kannada films, is making her debut in Bollywood with Goodbye, which features Amitabh Bachchan in the lead.

Having been in the industry for five years, the Pushpa star said she is currently at a phase where she is "testing waters" with her choices.

"I have always picked scripts based on my gut feeling. I believe what is meant for me will happen to me. I feel like that's the universe's way of saying it, so it's purely a gut feeling. When I heard the script (of 'Goodbye')... I'm at a point in my career, where I'm going out and testing waters.

"I don't know what's right and what's wrong. I don't know what people expect of me... I am an actor and I want to do good films," Mandanna told reporters here at the trailer launch of Goodbye.

For the actor, it is important to have a fun and memorable experience when she is working on a movie.

"I want to have fun while I do it. Till the day, I am able to work like this and make such memories, I am willing to do and might as well make everyone smile and give good memories to everyone watching the film.

"This film (Goodbye) is so special because of the things, which are already seen in the trailer. So it's going to be extremely special," she said.

Mandanna said she is currently living her dream of working with two acting legends— Bachchan in Goodbye and Allu Arjun in part two of Pushpa.

"I am living my dream. With Allu Arjun sir, I start 'Pushpa 2' in a couple of days. But right now having this trailer out in front of the audience with Bachchan sir, what can I say?," the actor added.

The movie marks the first collaboration between Bachchan and Mandanna, who recalled her first meeting with the megastar on her birthday two years ago.

"I was standing and waiting for him, and sir just walked in, crossed me and went. So I was like, 'ok, not now. This is not the time' because I was standing there, flashing a big smile... I thought (maybe) he was thinking about the scene.

"Then I went to him and told him, 'Hi sir, I am Rashmika and I will be playing your daughter'. I was so nervous, it is such a huge responsibility working with such big actors. It is just good to get each other's energy on the first day," she said.

Mandanna said she initially thought Bachchan didn't like her.

"He was so strict, sitting there and then we started having a banter like a father and a daughter. Our relationship got closer and closer throughout the making of the film. He is a beautiful person, so I'm just happy that I got to see his side while working with him," she added.

Mandanna formed an equally warm bond with her other co-star, Neena Gupta.

"I was just so comfortable working with her, and it was easy. The first day I came on set, I wondered how everyone knew everyone on set, and I was like, 'Wait, am I late to the party?' But now I'm chilling with them, they're my people also," she said.

Mandanna will also be seen in another Hindi film—Mission Majnu, opposite Sidharth Malhotra.

For actors Sunil Grover and Neena Gupta, who play pivotal roles in Goodbye, working with Bachchan has been like a dream come true moment.

"I had never dreamt of working with him (Bachchan), it is like the opportunity fell in my lap. And I was like, 'Is this actually true?'

"When I started in the industry, at that time OTT and TV was not there. I have played smaller roles and at that time, I could have never imagined that I would ever get an opportunity to be working with sir," Gupta said.

Grover said he would often imitate Bachchan on the sets.

"Everyone has the desire to work with sir and I am one of them. I thought I would just go and see sir everyday on the sets and do little work. Today 90 per cent of actors have become actors because of Bachchan sir," the actor-comedian said.

Producer Ektaa Kapoor said she had wanted to collaborate with Bachchan since childhood.

"I remember going to birthday parties at Amit ji's house, Shweta and Abhishek were my friends. And Amit uncle would always call my father and say that 'she just sat there and stared at me'.

"I don't think I ever wanted to work with anyone, no Khans, nobody, except for Mr Amitabh Bachchan and Vikas made my dream come true," she added.

Produced by Balaji Motion Pictures in association with Good Co., Goodbye is scheduled to be released in theatres on October 7.