'Doctor Strange in the Multiverse of Madness' also streams this week 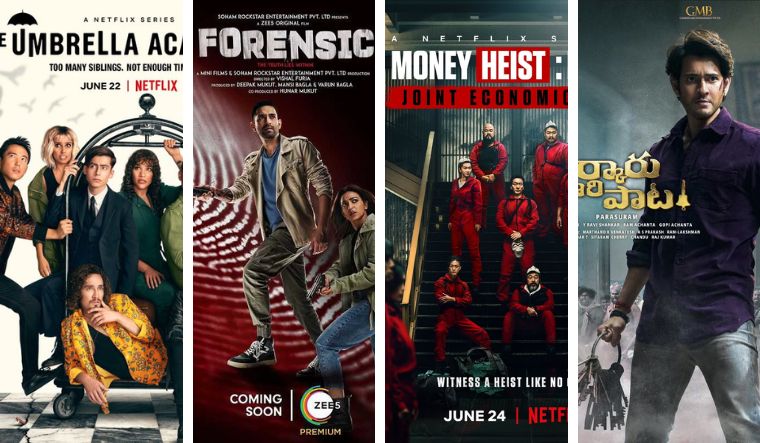 This week is all about interesting releases on various streaming platforms. With fresh seasons of shows like The Umbrella Academy, and movies like Forensic dropping on OTT, the weekend looks packed with binge-worthy content. Here is a quick look at what's arriving on Netflix, Amazon Prime Video, Disney plus Hotstar, ZEE5:

Doctor Strange in the Multiverse of Madness : Disney plus Hotstar

The Benedict Cumberbatch-starrer that released in theatres recently will now be available on streaming platforms. The film will be available in five languages—Hindi, Tamil, Telugu, Malayalam, Kannada and English. Directed by Sam Raimi, the movie is a sequel to 2016's Doctor Strange, which introduced Cumberbatch as Stephen Strange aka Doctor Strange in the Marvel Cinematic Universe (MCU). Doctor Strange in the Multiverse of Madness also stars Elizabeth Olsen, Chiwetel Ejiofor, Benedict Wong, Xochitl Gomez, Michael Stuhlbarg, and Rachel McAdams.

The Hargreeves siblings return for the third season of the superhero series The Umbrella Academy. An adaptation of a comic book series of the same name from Dark Horse Comics, the Emmy-nominated show revolves around a dysfunctional family of adopted sibling superheroes who reunite to solve the mystery of their father's death. From season 1, the siblings have been striving to prevent an apocalypse, while dealing with their own traumatic pasts and relationships.

The Telugu action drama starring Mahesh Babu and Keerthy Suresh in lead roles had released in theatres in May. The plot revolves around a banker, essayed by Mahesh, who believes financial discipline is very important in life.

Another eagerly awaited crime thriller, Forensic features Radhika Apte and Vikrant Massey in lead roles. With a serial killer on the lose, cops team up with a forensic expert to uncover the killer's identity. The film is the remake of 2020 Malayalam film Forensic which featured Tovino Thomas and Mamta Mohandas in lead roles. The movie also stars Prachi Desai, Vindu Dara Singh, and Rohit Roy in pivotal roles.

After the superhit Spanish series, Netflix is back with a Korean spin-off of Money Heist.The plot remains similar to the original—thieves overtake the mint of unified Korea. The police might find a way to stop the gang, save the hostages and track the mastermind behind it all.