The show, directed by Hwang Dong-hyuk, premiered on the streamer on September 17 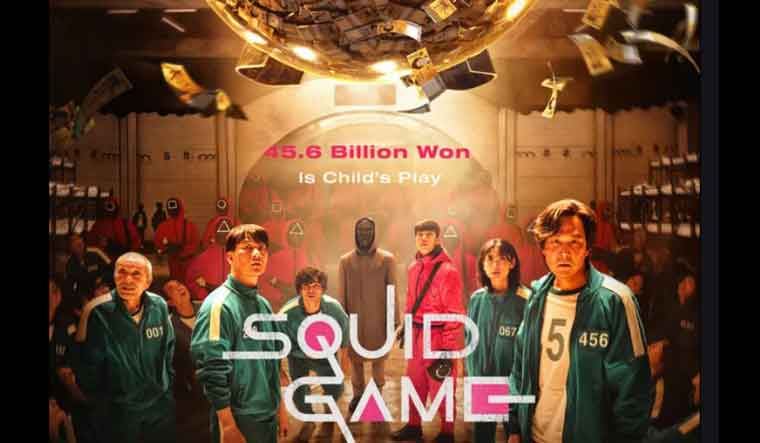 Streaming platform Netflix on Wednesday confirmed that its Korean language show Squid Game has become its "biggest series launch" till date after the survival drama hit the mark of 111 million views in less than a month since its debut.

The show, directed by Hwang Dong-hyuk, premiered on the streamer on September 17.

Squid Game has surpassed the record set by Netflix's Regency era series Bridgerton, an English language series, which stood at 82 million accounts in its first 28 days.

Last week, Ted Sarandos, co-CEO of Netflix, said Squid Game was on its way to becoming the biggest show in Netflix history.

Just like the Oscar-winning Korean language film Parasite, directed by Bong Joon-ho, the show has been lauded for highlighting the widening gulf between the ''haves'' and ''have nots''.

Squid Game has also attracted attention for its colourful and fantastical production design by Chae Kyung-sun; the green and pink tracksuits worn by the contestants and the game referees have sparked a merchandise race, and ''dalgona'', the Korean sweet at the centre of one of the games in the contest, has become a global rage.

According to reports, the popularity of the show in South Korea led to a surge of network traffic which caused SK Broadband to file a lawsuit against Netflix, seeking monetary damages to pay for increased broadband usage and maintenance costs associated with the show.

A phone number used in Squid Game belonged to a private resident who reportedly receiving up to 4,000 calls each day from people. After the user raised this issue, Netflix stated they would edit the show to remove the number, reports said.

“At Disney+ Hotstar we are committed to bringing powerful and category-defining stories to our viewers. Criminal Justice has been one of the most-watched Hotstar Specials series on Disney+ Hotstar and we are thrilled to bring yet another exciting chapter to our viewers," said Gaurav Banerjee, President & Head - Content, Disney+Hotstar & HSM Entertainment Network, Star & Disney India.

Sameer Nair, CEO of Applause Entertainment, said the third season will tackle a subject that has not been explored before: the legal process for juveniles.

"We take a look at the legal process for juveniles in India within a storyline that explores the stresses of modern urban relationships," he added.

Written by Peter Moffat, the original UK version of "Criminal Justice" is an award-winning British television drama that follows an individual on a suspense-filled journey through the criminal justice system.

Also adapted in the US as The Night Of, starring John Turturro and Riz Ahmed who won an Emmy for his performance, the series has won multiple TV awards including the BAFTA, the RTS and the International Emmys.

"Embarking on the production for season three demonstrates the immense potential of the Criminal Justice franchise to transcend geographical boundaries and touch the hearts of local Indian audiences," Gogate said.