A quick look at films and series releasing this week 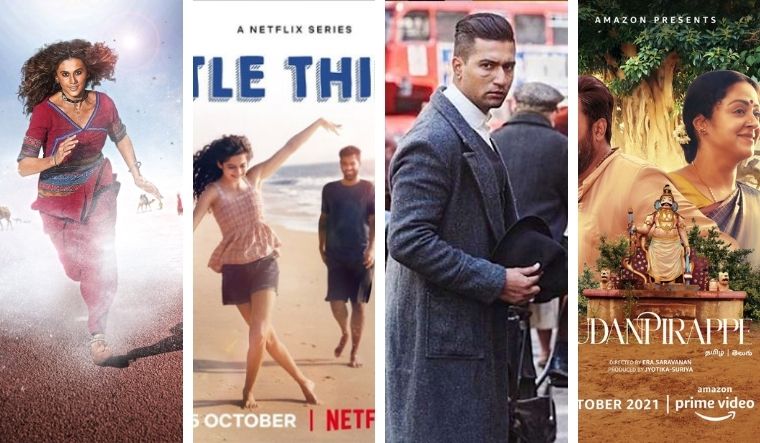 It is a festive week, and a handful of movies are releasing on streaming platforms to add to the fun. From Taapsee Pannu’s sports drama Rashmi Rocket to the highly anticipated final season of Little Things, here is a quick look at films and series you can watch on OTT platforms this weekend.

The family drama directed and written by Era Saravanan is actress Jyotika’s 50th film. Udanpirappe is the second of the four-film collaboration slate between Amazon and south star Suriya's 2D Entertainment after Raame Aandalum Raavane Aandalum. Udanpirappe also stars Sasikumar and Samuthirakani. "Weaving a strong thread of family ties in an emotionally powerful narrative, Udanpirappe is a deep-rooted story about sibling love, relationships and emotions," the synopsis shared by the streamer read.

The film is produced by Jyotika and her husband Suriya.

The sports drama starring Taapsee Pannu in the lead is directed by Akarsh Khurana. The story follows the tale of 'rocket', who finally gets the chance to realise her dream and compete professionally, only to realise that the race to the finish line is peppered with many hurdles. Rashmi Rocket also stars Supriya Pathak, Abhishek Banerjee, Priyanshu Painyuli and Supriya Pilgaonkar.

The show follows an everyday couple, Dhruv (Dhruv Sehgal) and Kavya (Mithila Palkar), navigating the complicated world of relationships, careers, and aspirations. The season will chronicle the couple's "tricky transition" from young love to a more mature relationship. The show has been produced by Dice Media and written by Abhinandan Sridhar, Nupur Pai, Garima Pura Patiyaalvi, Gaurav Patki.

Sardar Udham is a biographical film about the legendary freedom fighter Udham Singh. This film stars Vicky Kaushal in the title role. Described as a "heart wrenching story of retribution", Sardar Udham showcases the journey of a gallant man who made sure the world never forgets the lives of his beloved brethren who were brutally killed in the Jallianwala Bagh Massacre of 1919, the streamer said in a statement. Sardar Udham also stars October actor Banita Sandhu and Amol Parashar.

Free Guy is a science fiction action-comedy starring Ryan Reynolds. Reynolds stars  as a bank teller, named Guy, who discovers that he is actually a non-player character in an open-world video game and becomes the hero of the story, trying to save his friends from deletion by the game's creator.

Bill Pullman's Harry Ambrose will return with a new mystery in the fourth season of the Emmy-nominated Netflix crime drama series The Sinner. The eight-episode ‘why-dunnit’ series will have Ambrose, now retired and on a getaway to an island, roped in to investigate an incident involving the daughter of a prominent family in the island. “In season four, we are excited to dig even deeper into the psyche of Bill Pullman’s beloved detective Ambrose character, while introducing our audience to a compelling, completely new mystery,” USA Network president Chris McCumber had said in a statement. The fourth season of the show, with new cast members, except for Pullman and Jessica Hecht (playing Ambrose's love interest from last season, Sonya Barzel), will be aired on the streamer from October 13.