“I don’t have a uterus and she is pregnant but we out here," Schumer wrote 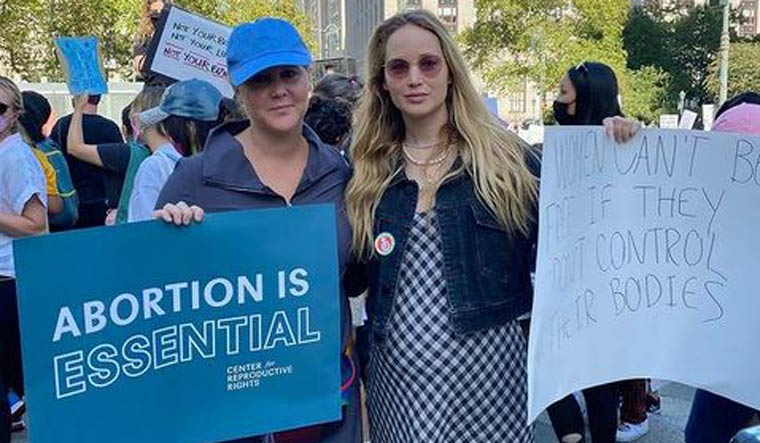 Jennifer Lawrence, along with comedian Amy Schumer made an appearance at the Women’s March to support women’s right to safe abortions on October 2, in Washington.

“I don’t have a uterus and she is pregnant but we out here @womensmarch @plannedparenthood #rallyforabortionjustice” Schumer, 40, captioned the photo via Instagram.

Lawrence is expecting her first baby with her husband Cooke Maroney, an art gallery owner. She married Maroney in 2019. Wearing a black and white gingham dress and a denim jacket, Lawrence held up a sign that read, “Women can’t be free if they don’t control their bodies.” Schumer in the meanwhile was holding a blue sign from the Centre for Reproductive Rights that read, “Abortion is essential”.

Schumer and Lawrence, who have been friends for years, have both been outspoken about women’s rights.

Texas on September 2, passed an abortion law, that would prevent women from availing abortion after six weeks or after a fetal heartbeat was detected. At six weeks, several women don't even know if they are pregnant. President Joe Biden had lambasted the Supreme Court's decision not to block a new Texas law banning most abortions in the state and directed federal agencies to do what they can to insulate women and healthcare providers from the impact.

According to People magazine, on Saturday, as many as 600 abortion marches took place across the US, as the Supreme Court prepares to consider another restrictive ban on abortion rights. Schumer, who suffered from endometriosis, recently had her uterus removed.