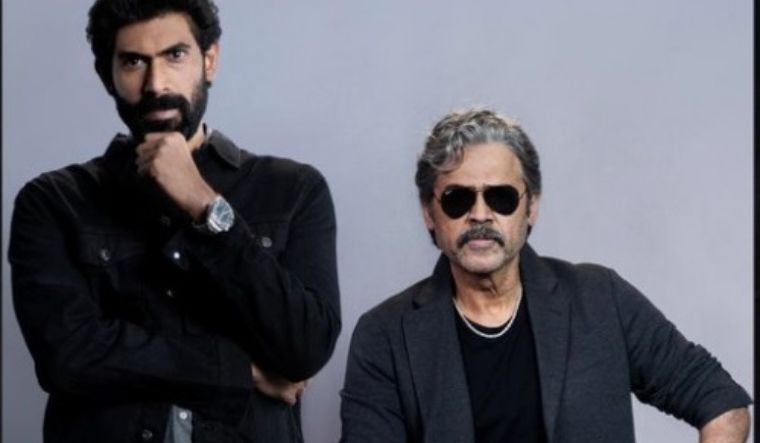 The series will follow the life of Rana Naidu, the go-to guy for everyone in Bollywood when they have a problem. Karan Anshuman of Inside Edge fame is the showrunner and the director for the show and Suparn Verma (The Family Man season two) will co-direct it.

The series, which will be in Hindi, will see the real-life uncle and nephew duo -- Venkatesh and Rana -- share the screen for the first time. Rana, who has starred in Hindi films like Dum Maaro Dum and Baby, said he is thrilled to share screen space with his uncle Venkatesh.

"It's lots of special firsts for me. Working with my uncle Venkatesh and the first with Netflix in long form storytelling that's completely different from what both of us have ever done in our careers. I'm extremely happy to be with a crew and a platform that knows this the best," the 36-year-old actor said in a statement.

It will be Venkatesh's first Hindi project since the 1995 film Taqdeerwala. The Telugu star made his Bollywood debut in 1993's Anari, opposite Karisma Kapoor. Venkatesh said the series is the perfect project for him to collaborate with his nephew.

"I cannot wait to work with Rana, we are going to have a blast on-set and this show is the perfect project for us to work on. I am a huge fan of Ray Donovan myself and the entire team is pulling in all the stops to ensure we do justice to it," he said. Monika Shergill, VP, Content, Netflix India said, they are excited to bring the powerhouse performers like Rana and Venkatesh for the first time.

"The series, 'Rana Naidu', will be a thrilling Indian adaptation of a record breaking international show and will take the audience on a breathless ride with the dynamic duo," Shergill said.

Sunder Aaron, Locomotive Global Inc, said this is going to be an extraordinary and thrilling show for the viewers.

"We are just getting rolling and cannot wait for the world to meet a new kind of Indian hero in Rana Naidu!," Aaron said. It was announced in 2019 that Locomotive Global Inc had acquired the first scripted remake rights of "Ray Donovan".

Featuring Liev Schrieber in the titular role, Ray Donovan debuted on Showtime in 2013 and ran for seven seasons. Schreiber is set to reprise his role of a professional fixer in the movie adaptation of the hit series.