From 'Tughlaq Durbar', 'Tuck Jagadish', to 'Lucifer', what to watch on OTT platforms this week 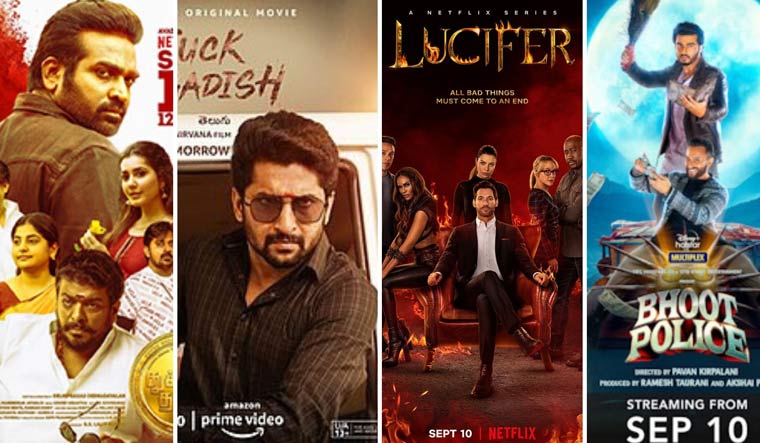 OTT platforms are coming up with quite a few interesting releases this weekend. From the return of Lucifer on Netflix and Vijay Sethupathi's political satire Tughlaq Durbar, to an early release of Bhoot Police, cine lovers across languages do have a reason to cheer, come weekend.

Here is a quick look at the movies and shows dropping in OTT platforms this week.

The Saif Ali Khan and Arjun Kapoor-starrer Bhoot Police gets an early release, on September 10 although it was slated to release on September 17. The adventure horror-comedy film also stars Jacqueline Fernandez and Yami Gautam in the lead. The movie is directed by Pavan Kirpalani of Phobia and Ragini MMS fame.

Directed by Shiva Nirvana, Tuck Jagadish is an action drama with Nani in the lead. The movie tells the story of a feuding family and how the younger son, played by Nani, ends the discord and carries on with his father's legacy. Jagapathi Babu will play the antagonist in the movie. Tuck Jagadish also stars Ritu Varma and Aishwarya Rajesh.

A political drama, Tughlaq Durbar has Vijay Sethupathi in the lead. Directed by Delhi Prasad Deenadayalan, the movie is about a budding politician whose devious plans to rise in the ranks are foiled by his alter ego who interferes with his every move. The movie also stars Parthiban, Raashi Khanna, and Manjima Mohan in the lead.

The lovable devil Lucifer Morningstar, who abandoned hell to live among us, returns for a sixth and final season on September 10. The final season of the show promises to be "more intimate" and character-focused, according to co-showrunner Joe Henderson. Although it was rumoured that there will only be eight episodes, it was later confirmed that the show will have 10 episodes.