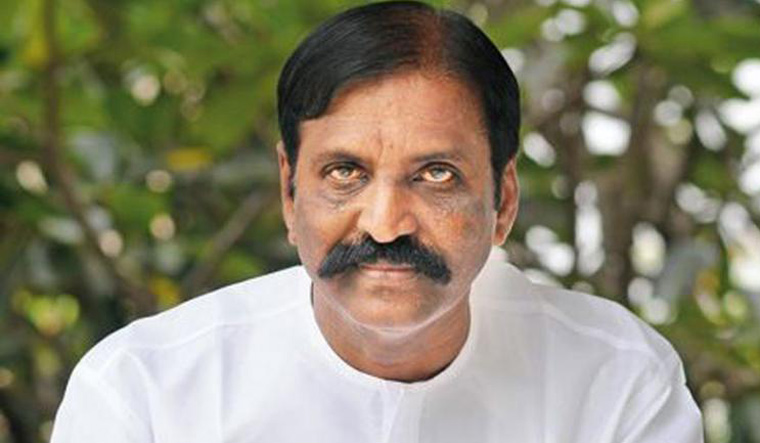 Though he said he was ''returning'' the award, in effect he was declining the honour, saying he did not want the jury to face embarrassment and blamed ''vendetta'' behind the decision to reconsider the award by the ONV Cultural Academy. He requested that the cash prize of Rs three lakh announced by the academy be given to the Kerala Chief Minister's Public Relief fund and announced his own contribution of Rs two lakh towards the same, as a "token" of his love for Kerala and its people. "Due to the interference of those with vendetta the award has been subject to reconsideration is what I have come to know." Wondering if the protests were aimed at "belittling" him and Kurup, Vairamuthu said he wanted to make sure that the "scholarly jury should not be pushed to embarrassment."

"Therefore, I only desire to avoid receiving the award amid controversies," he said. Indicating that he was very straightforward, Vairamuthu said "there is no need to rub my truthfulness." "Therefore I have taken a strong decision and I am announcing it with love and clarity. I am returning the ONV Literary Prize to the ONV cultural academy," he said in a video posted on his official Twitter handle. On Friday, the ONV Cultural Academy had said it has decided to review the decision to grant the fifth ONV Literary Prize to Vairamuthu.

The academy's decision came in the wake of mounting protests from various quarters to give the award to the Tamil song-writer and poet who is facing "MeToo" accusations. Actors Parvathi Thiruvothu and Geetu Mohandas and singer Chinmayi Sripada, who was among the women who accused Vairamuthu of sexual harassment, had objected to the Kerala honour for the lyricist. Vairamuthu had earlier denied the allegations levelled against him, calling them "totally false" and "motivated".

Vairamuthu further thanked Tamil Nadu Chief Minister M K Stalin and all those who had greeted him earlier for being chosen for the award. He also said "let the relationship between Tamil and Malayalam flourish."

Earlier, an expert jury, comprising Malayalam University vice chancellor Anil Vallathol and poets Alankode Leelakrishnan and Prabha Varma, selected the winner and it had been announced that the date of the award presentation would be announced later in view of the Covid-19 situation. Noted critic M Leelavathi had bagged the award last year.

Also a novelist, Vairamuthu was conferred the Padma Shri in 2003 and Padma Bhushan in 2014.