How Bollywood stayed in the news throughout 2020

From actor deaths to drug use probe, Bollywood made news through the year 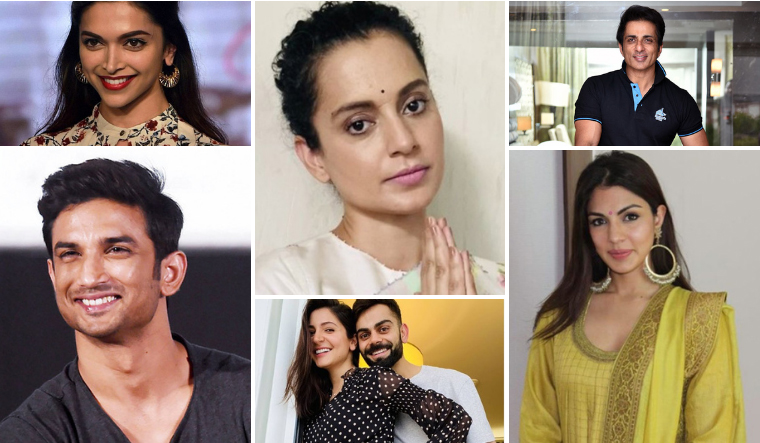 It goes without saying that the year 2020 has been tough. With movie theatres shut and productions halted, the entertainment industry was one of the worst hit by the pandemic.

The usual frenzy around first-day-first-shows, red carpet events and even the 'spotted here' shots of celebs by paparazzi were missed for almost the entire year.

Bollywood, however, continued to make news, even without much happening on the big screen. The year was defined by shocking deaths, probe into drug abuse in the film industry, social media clashes and heart-warming moments of a reel villain turning real-life hero (read Sonu Sood).

Here is a look at why Bollywood stayed in the news throughout the year.

Sushant Singh Rajput's untimely death: The shocking death of actor Sushant Singh Rajput will forever have a place in Bollywood's history—not just because his suicide left fans and the industry rattled, but also because it opened a Pandora's box of skeletons that lay hidden in Bollywood's closet. Sushant was found dead in his Bandra apartment on the evening of June 14. At 34, the young actor had a promising career ahead and was awaiting the release of his next film Dil Bechara, an official remake of the Hollywood film The Fault in Our Stars. After the initial heartbreak about a star gone too soon, Sushant's death turned into a national frenzy with conspiracy theories flying hither-thither. A few days after his death, star kids like Alia Bhatt and Sonam Kapoor and filmmaker Karan Johar, too, were at the receiving end of immense social media hatred, and boycott campaigns for promoting 'nepotism' and overlooking 'outsiders' like Sushant.

The nation remained hooked to new tit-bits of information and theories that would emerge everyday, be it details of his personal life, his relationships and even speculations about his mental health. As the story developed, it also took a political hue with the state governments of Maharashtra and Bihar at loggerheads with each other over CBI probe into the actor's death.

Rhea Chakraborty and a 'witch hunt': The actress found a permanent spot on Twitter's trending list and was the subject of many prime-time debates on national television after the death of her boyfriend Sushant Singh Rajput. In what has been likened to a 'witch-hunt', Rhea, her brother Showik Chakraborty and her family were hounded by the media and public for the actor's death. In his official complaint to the Patna Police, Sushant's father named Rhea and accused her family of manipulating Sushant, misusing his finances and pushing him to take the extreme step. An FIR was registered against Rhea, based on the complaint. The legal battle hogged national limelight for months.

Drug raids: It took an actor's suicide for law enforcement agencies to open a probe into use of narcotic substances in Bollywood. After Sushant's death, the Narcotic Control Bureau (NCB) started a  probe into drug use in Bollywood. This also resulted in arrests of Rhea, Showik and even Sushant's house manager Samuel Miranda. The probe continued to be the hottest news for months with A-listers like Deepika Padukone being summoned by the NCB. Sara Ali Khan, Arjun Rampal, and Shraddha Kapoor were summoned. Comedian Bharti Singh and her husband were arrested.

The probe also spilled over into other film industries with actresses being arrested in Sandalwood too.

'Team' Kangana Ranaut: On the work front, the actress began the year well with the release of sports drama Panga in January in which she essayed a Kabbadi player. But what went on for the rest of the year, was the actress taking on a 'panga' with pretty much everyone on social media. Kangana, who has never been one to mince words, is well known for her take on nepotism in the industry. Kangana calling out Karan Johar as the 'torchbearer of nepotism' on his own show, has been the stuff of legends.

With Sushant Singh's death, Kangana took on a more powerful avatar and fired tweets to 'get him justice'. All through the year, Kangana grabbed eyeballs with her tweets, be it about Sushant, actresses Swara Bhasker and Taapsee Pannu, filmmaker Anurag Kashyap, nationalism, nepotism and currently the farmer protests. Taking a dig at Kangana's social media warfare, Kashyap suggested she take a few more people along and head to take on China. This triggered a war of words between the filmmaker and Kangana.

Adding a filmy touch, Kangana clashed with the Maharashtra government and locked horns with Shiv Sena leader Sanjay Raut on Twitter. She likened Mumbai to 'Pakistan-occupied Kashmir', a tweet that faced massive criticism. The plot tightened with the BMC demolishing a part of Kangana's office-bungalow in Mumbai. It later became a win for the actress, after the Bombay High Court ruled in her favour and asked the BMC to provide compensation for the damages caused.

Sonu Sood, the 'messiah': Amid all the negativity, Bollywood's screen villain Sonu Sood emerged a real-life hero for thousands who struggled during the pandemic. After total lockdown was announced, the country witnessed its biggest-ever migrant crisis. Sood, and his Ghar Bhejo campaign, became a symbol of hope for many as he helped lakhs of stranded migrants reach their homes in villages and towns. He also arranged special flights to rescue Indian students who were stranded abroad. For his work, Sood was also selected THE WEEK's Man of The Year. Sood's popularity soared amid the pandemic, and social media dubbed him a superhero and his work triggered a plethora of memes, too. Speaking to The Week, Sood said the campaign has changed him as a person. “People I sent home still send me messages every day. I take care of their children's education and medical needs. I think now they are a part of my family and I believe that I have a home in every part of the country,”he said.

Irrfan Khan, Rishi Kapoor's deaths: In an year marked by many prominent deaths, Bollywood lost two more screen icons —Irrfan Khan and Rishi Kapoor. Irrfan was diagnosed with neuroendocrine tumour two years ago and Kapoor was battling cancer too. Irrfan and Kapoor's passing came back-to-back, and fans and the film fraternity were left heartbroken. Two of India's finest actors, however, did not get the fitting funerals they deserved due to the nationwide lockdown that was in place during their deaths.

Stars testing positive for COVID-19: Singer Kanika Kapoor was the first celebrity in the country to test positive for the novel coronavirus. Through the year, many others tested positive—Neetu Kapoor, Varun Dhawan, Malaika Arora, Arjun Kapoor and Kiara Advani. However, it was Amitabh Bachchan testing COVID-positive that dominated national headlines, and also found a spot in international news too. Bachchan's diagnosis sparked health concerns across the country, but the 77-year-old beat the virus. Abhishek Bachchan, Aishwarya Rai Bachchan and their daughter Aaradhya Bachchan had also tested positive for COVID-19.

Deepika Padukone at JNU, Diljit Dosanjh supports farmer protests: Deepika Padukone made a powerful statement just by her silent presence at the Jawaharlal  Nehru University (JNU) in January, to express solidarity with students who were attacked by a mob. The incident created a stir across the country, and left social media divided. While many hailed her for being there, #boycottdeepika also trended on Twitter. Her visit came at a time when most of Bollywood's A-listers chose to stay silent on the anger across the country against the CAA-NRC and the violence at JNU.

Punjabi singer-actor Dijit Dosanjh became an overnight social media hero after he took on Kangana Ranaut, that too, with tweets in shuddh-desi Punjabi. Dosanjh also joined farmers at Delhi’s Singhu border in their protest against three farm bills on December 5.

The Twitter war started after Kangana misidentified a woman farmer from Punjab as Bilkis Bano, the octogenarian who made international headlines during the anti-CAA protests at Shaheen Bagh. She retweeted the post with pictures of two elderly women, including Bilkis Bano, and wrote that the "same Dadi" who featured in Time Magazine was "available in 100 rupees". Dosanjh shared a BBC interview of the woman who Kangana had wrongly identified and tweeted that her name is Mahinder Kaur. In the vitriolic exchange that followed, Kangana called Diljit filmmaker Karan Johar's "pet", a bootlicker. Diljit hit back with fitting replies in Punjabi, which Twitterati were more than happy to translate into English for all those who were keenly watching the Twitter spat. Bollywood actors Swara Bhasker, Richa Chadha, Angad Bedi, Shruti Seth, Kubbra Sait also posted support for Diljit.

Besides these, Priyanka Chopra broke the internet with her Grammys red carpet appearance in January, and Anushka Sharma and Kareena Kapoor announced their pregnancies. In fact, Virat Kohli's tweet announcing Anushka's pregnancy was declared the most liked tweet of 2020 in India. Bollywood also turned the OTT way, with many prominent films premiering on Netflix and Amazon Prime Video this year.