Online action of her paintings will take place on December 2 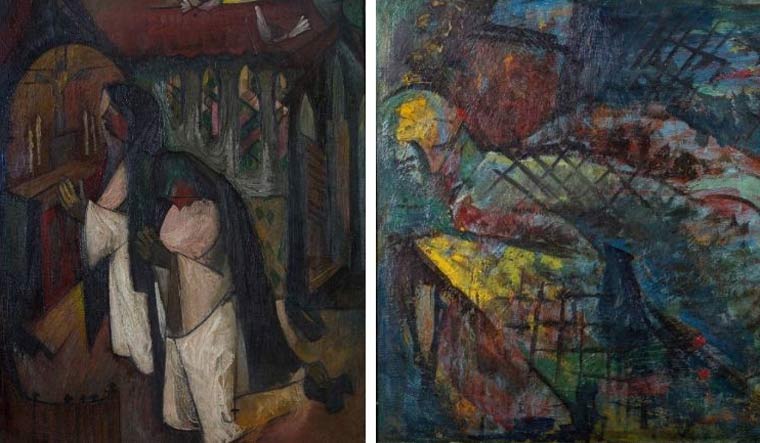 The sacred, devotional world of 'Prayers' is a contrast to the 1950 'Lady in Repose', a abstract portrayal of a female nude

India's first Oscar winner, Bhanu Athaiya, known for her formidable work in costume designing in over 100 films across five decades, was also a painter. In a rare auction of artworks on December 2 from the estate of the late Bhanu Rajopadhye Athaiya—she died at the age of 91 on October 15 from complications of brain cancer—the world will get a glimpse of an early chapter in her artistic career.

"Her paintings are coming to the market for the first time ever. None of her artworks have been sold before. She was the only woman in the Bombay Progressives Artists' Group and India's first Oscar winner. In that context, this is an extremely unique event," says Indrajit Chatterjee, director at Prinseps, the online auction house which will host the 32-lot sale, valued at approximately Rs 3,00,00,000. It carries paintings and drawing by Athaiya from the late 1940s to 1950s, a period of great artistic ferment in Bombay.

Affiliated with the Bombay Progressives Artists' Group, Athaiya was the only woman to exhibit three paintings in a show by the famed artists' collective comprising the likes of F. N. Souza, S. H. Raza, and M. F. Husain among others, in 1953.

This is also the first time an Indian auction house will allow audiences to attend the bidding virtually via Zoom. The auction will be conducted by art historian and heritage conservationist Brijeshwari Kumari Gohil from Bhavnagar. The format of the auction will allow both buyers and audience members to virtually partake in the excitement of an art auction. Key works include 'Prayers', an oil on canvas that was exhibited at the 'Progressive Artist Group' exhibition hosted by the Bombay Art Society in 1953. The painting has been placed at an estimate Rs1,00,00,000 – Rs 1,50,00,000. It shows two nuns in a chapel in muted tones, kneeling and praying. The sacred, devotional world of 'Prayers' is a contrast to the 1950 'Lady in Repose', a abstract portrayal of a female nude.

The auction is supported by a rich catalogue which has an extensively researched essay by cultural theorist and art historian Ranjit Hoskote. He presents a case for an alternate reading of the much-eulogised Progressive Artists Group (PAG) for a more nuanced understanding of Indian modernism. "Had Bhanu Rajopadhye Athaiya continued to practise as a painter, she would certainly have been a major presence in her pioneering generation of cultural practitioners in newly independent India," Hoskote writes in the essay.

Born in the rich artistic milieu of Kolhapur, considered the "Paris of India" in the beginning of the 20th century and home to icons like Dhurandhar, Baburao Painter (also a film producer contemporary to Dadasaheb Phalke), Abalal Rehman, etc., Athaiya went on to study at the prestigious Sir JJ School and was in sync with the art environment of 1950s Bombay before she made the plunge into the world of fashion, culminating with an Oscar for costume designing in Richard Attenborough's Gandhi. Prinseps’ introduction to Bhanu Athaiya was initially through her book collection, another category the auction house specialises in.