Controversial statements didn't dent the image of the ultimate gentleman 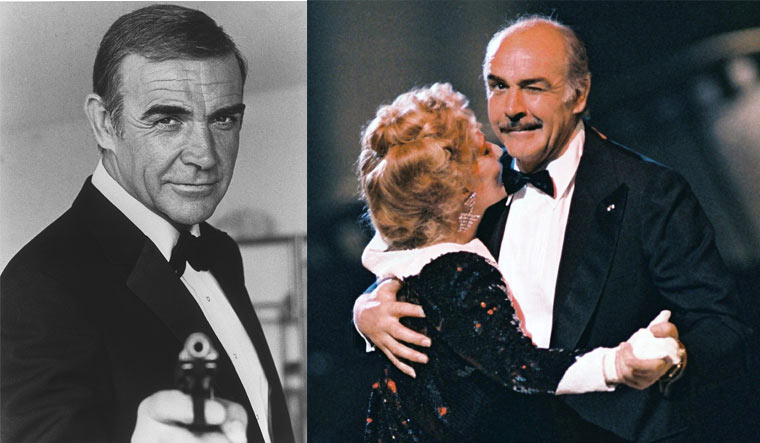 There's AWESOME, and then, there's Sean Connery. This is the wording in a forward doing the rounds of social media groups over the last hour, just as the sad news of his demise in the Bahamas, at the age of 90, was released by BBC.

Sir Sean Connery was that pioneer, the original. The template on which celluloid spies across decades and cinema industries have shaped themselves. Every male has had a secret desire to be that Bond, at least once; smoking gun in one hand, a beautiful woman draped over the other. And every female who saw him on screen nurtured that dark fantasy of being a Bond girl, notwithstanding the overtly chauvinistic character that he was, in whose world, women were decorations, and totally expendable.

When Connery gave his flesh, blood and drop dead gorgeous looks to Ian Fleming's James Bond in Dr No, the world was a different place from today. It was the era of the Cold War, and a time when the world wasn't so small. Connery or Bond (it was the same) took people to places they would not get a chance to see otherwise—exotic locales, plush palaces—and gave them a taste of the good life. Martinis, shaken, not stirred. He made spying into a glamorous, larger than life career.

Sir Sean Connery has died at the age of 90. He was the first actor to play James Bond on the big screen in Dr. No in 1962, From Russia With Love, Goldfinger, Thunderball, You Only Live Twice and Diamonds Are Forever followed. pic.twitter.com/VaFPHCM5Ou

Today's Bond, the lean, mean, one man army of Daniel Craig, caters to a different world, a different sensibility. Yet, every Bond, be it Roger Moore or Pierce Brosnan, has had to compare himself with the bar that Connery set. And it was a very high bar.

Connery's greatness lies not just in being the original Bond, but as much as in stepping out of Bond's character and going on to portray a variety of roles during his career, moving effortlessly from becoming Maj. Gen. Roy Urquhart in A Bridge Too Far to crime fighter Jim Malone in The Untouchables (he got his only Oscar for this role). He made a pretty good thief, too, teaming up with the Welsh beauty Catherine Zeta Jones for a museum heist in Entrapment.

Today, we honor a legendary actor, whose work—ranging from his Oscar-winning performance in "The Untouchables" to his years as James Bond—has left an indelible mark on our film community and our lives. Rest in peace, Sean Connery. pic.twitter.com/epYrPrd7P5

He faced what every subsequent Bond would also face, that feeling of being trapped in Bond's image forever. He said no, yet, returned for his seventh, and last, the aptly titled, Never Say Never Again. Then, he moved on. To other roles, further glories. In fact, later generations were introduced to Connery through these films, and they fell in love with him. By then, Bond was Brosnan.

Connery was that complete package. Good looks, a sexy voice, powerful oratory skills, and charm that oozed from every pore. He didn't start out with much. Known today as the ultimate Scottish gentleman, Connery started out life in the wrong end of the town, to working class parents. He dropped out of school at 13, and by the end of his teens, young Connery became a case of male pattern baldness, a development which can strike a severe blow to a man's developing sex appeal. In fact, he had to wear a toupee when he got into the role of James Bond, because, as heroines today are wont to say, “the role demanded it”. Yet, even as he was hitting his sixtieth birthday, he was named by People magazine as the “Sexiest Man Alive”. Bond may have made martinis popular, but clearly, Connery was like wine, he only got better with age. It was a stroke of good luck (for his swooning fans for sure) that Connery, who showed promise on the soccer field, decided to choose a career in acting instead.

Connery's personal image, too, remained that of a gentleman. Even his famous interview to Playboy in 1965, where he said that there was not anything particularly wrong about hitting a woman, has not dented that image. In a changing world, another man would have later said he did not mean the way it came across. But, even decades later, Connery stood by what he had said: That an open handed slap is justified, if all other alternatives fail and there has been plenty of warning. Perhaps the fact that Connery never made it to the news for such acts made people overlook his opinion.

It says something for the extraordinary charisma of this Edinburgh lad to have created the most iconic character in film & then, rather than be typecast by it, become equally famous for just being Sean Connery. A real screen legend; oft imitated (by all!) but never equalled. 1/4 pic.twitter.com/TOdAI0Fxnv

Connery is missed as much in girlie circles as he is in testosterone-pumped men’s groups. “He had two small tattoos on his right arm. One saying ‘Scotland Forever’, the other, ‘Mum and Dad’,” says Munga Nagpal, ferreting out this nugget. And Connery, the artist, gave people reason to fall in love with him over and over again, says Naazli Shah. “Just listen to him rendering ‘Ithaca’ by C.P. Cavafy,'' she says. That his marriage to Micheline Roqueburne stayed strong for 45 years is another score in his favour, for his female following.