Jahnvi Kapoor portrays her character in the film ‘Gunjan Saxena: The Kargil Girl’ 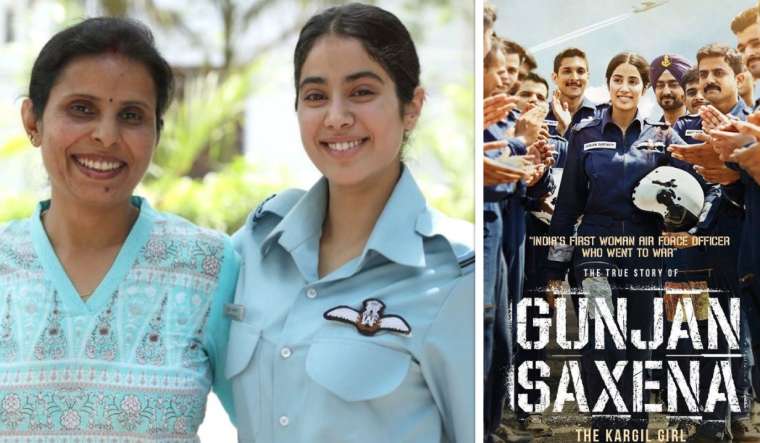 Growing up in a family of Army personnel, Gunjan Saxena was always given the wings to further her ambitions. Perhaps, that is why she wanted to become a pilot when she grew up. She wanted to be in the cockpit since early on in her childhood years. That was her only dream. The job profile didn’t matter. However, as she finished graduation from Hansraj College in New Delhi and joined the Delhi Flying Club at Safdarjung, in the early 1990s, the Indian Air Force began inducting women pilots as well.

“It was destiny,” Saxena told THE WEEK over a video call from Varanasi where she lives with her family now.

Getting into the defence sector felt like the right step ahead. One, because defence felt like a familiar environment with her father being an army officer; and two, no one can take away the “glamour and glory” of a defence uniform.

One of the highlights of Saxena’s career that began in 1995 is being at the frontlines during the 1999 Kargil War. Her contribution would later bestow upon her the Shaurya Chakra, as well as the title, ‘the Kargil girl’.

“The time I spent there is one of the most cherished memories of my life. It helped me evolve, not just as an individual, but also as a professional, as an aviator,” Saxena said.

Besides flying Helicopter Cheetah during the war in 1999 as a flight lieutenant, one of her major roles was to evacuate injured soldiers from the battlefront. Many may perceive this task to be scarring and traumatic, but Saxena says it brought a sense of achievement.

“… A sense of satisfaction that I could do my job well and be a part of the operation. It’s one of the most thrilling and exciting experiences that I could get as a helicopter pilot, flying in that terrain and in that situation,” Saxena said.

“I was in the fourth course of the flying branch of the Indian Air Force. The first and the second course were for transport and the third and fourth were for helicopters. In my batch, there were six women officers who were in training, including me. After the training was over, two of us—Srividya Rajan and I—were posted in Udhampur, a little ahead of Jammu. During the Kargil operations, the entire unit of pilots moved to Srinagar,” she said.

Saxena divides her initial experience of being one of the first women to be inducted into the Air Force, a male-dominated territory until then, into two parts. “As far as the training is concerned, which is my first interaction with the Air Force at the Academy, I didn’t really feel there was anything to do with gender. The ground training and academics didn’t let us feel like we were women. But when it came to the flying training, on the first day my instructor told me that ‘you may be here as a lady pupil, but when I sit in the cockpit with you, I wouldn’t remember that you are a lady pupil. And the aircraft also doesn’t know who is flying it, male or female, so I am going to train you as well as any other pilot. That’s the way you should also look at it.’ That bias was removed right there, if at all it was there.”

After the training, Saxena was posted in Udhampur. For the male officers already posted there, it took time and effort to accept a female officer, but it took the right course sooner than expected.

“I think initially, the people, the officers who were already there, had never worked with women officers before. For them, it was a new situation to handle. There were apprehensions. There were times when they were not sure of what to expect from us. But it all took a very positive turn. And, I would say, at a very good pace because the moment they realised that we were doing things the way they were doing it, at the same level, as far as the profession was concerned, the acceptance came easily,” recalls Saxena.

It would follow with her going to the war front. Saxena says that she may have been the only woman pilot combating at the war front, but no one, in the general public, knew about it until the end. “The fact that I was the only woman pilot at the Srinagar air base came to light only after the operations were over and the media came there. It was, in fact, the media that highlighted the fact and caught on to it,” she recalled, adding that there some apprehension among the other officers. “But it was momentary and soon, everyone just got busy in planning the operations.”

Saxena never thought that she or her life would inspire a film, not even in her wildest dream. “It is a big honour for me,” says Saxena, who is humbled that even the title of the movie, Gunjan Saxena: The Kargil Girl, which releases on Netflix on August 12, has her name.

When director Sharan Sharma called her for the first time and showed interest in making a movie on her life, Saxena wasn’t too sure. “Perhaps because I had never thought of something like that.” But the phone call turned into a meeting and long chats about her life and her role in defence.

“This was my first interaction with anything to do with Bollywood. I think Sharan was extremely respectful and sensitive to the whole idea. Also, he was very aware of the fact that it is someone’s personal life that he is handling and he was careful about that,” Saxena said.

Saxena was further surprised by the curiosity of actor Janhvi Kapoor, who plays her on screen. “She took interest in smaller details. She met me, my family including my parents, and tried to understand the little nuances. I thought that she was very sincere in the portrayal,” said Saxena, who was astonished after her first time on the film set.

“I saw the shots being taken on the monitor and felt it was okay, but there would be many retakes. But I realised that was being done to get the smaller notes right. I would be really fortunate if the movie could be inspiring for people, and send a positive vibe, not just to young girls but young people who are striving to achieve their dreams,” Saxena said.