'Sooryavanshi' to release in theatres on Diwali, '83' on Christmas 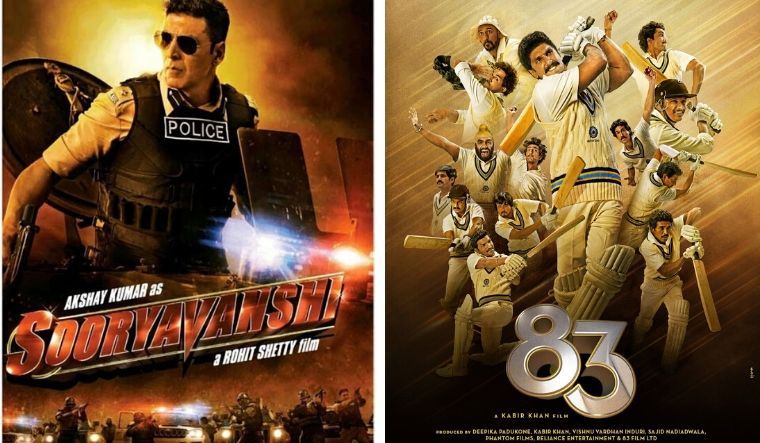 After Disney Plus Hotstar announced the release of seven Bollywood films, cinema chains like PVR, INOX have confirmed the theatrical release of much awaited films Sooryavanshi and 83.

“Exciting times ahead.. Gearing up to release Rohit Shetty's Sooryavanshi on Diwali and Kabir Khan's 83 on Christmas this 2020!,” PVR Cinemas tweeted. Market analyst Taran Adarsh also confirmed that these films will release in theatres first.

Though cinema chains confirmed that Sooryavanshi will release on Diwali and 83 for Christmas, there has been no information on when cinema theatres will be allowed to reopen in the country. According to Unlock 2 guidelines released on Monday, theatres will remain closed till July 31, as of now.

Directed by Kabir Khan, sports drama 83 chronicles India's first World Cup win under Kapil Dev's captaincy in 1983. Ranveer Singh essays Kapil in the film which also features Hardy Sandhu, Tahir Bhasin, Jiva, Saqib Saleem and Pankaj Tripathi among others. Deepika Padukone essays Kapil Dev's wife Romi. The film was initially scheduled to release in March and was postponed due to the coronavirus pandemic. Ranveer’s look from the film had drawn praise for his uncanny similarity to Kapil Dev. Deepika had said, for her,'83 is an ode to every woman who prioritises her husband's dreams over hers. "To be able to play a small part in a film that captures one of the most iconic moments in sporting history has been an absolute honour,” she said.

Rohit Shetty's Sooryavanshi, yet another addition to the cop franchise, was also scheduled for a March release. It stars Akshay Kumar in the titular role along with Katrina Kaif, Gulshan Grover, Abhimanyu Singh, Jackie Shroff and Sikander Kher. Sooryavanshi is the third film in Rohit's cop universe after Ajay Devgn's Singham and Ranveer Singh-starrer Simmba. This is Akshay and Rohit's first project together. Ajay and Ranveer are reprising their characters for extended cameos in the film.