'Laxmmi Bomb', 'Bhuj' among 7 Bollywood movies to stream on Disney+Hotstar 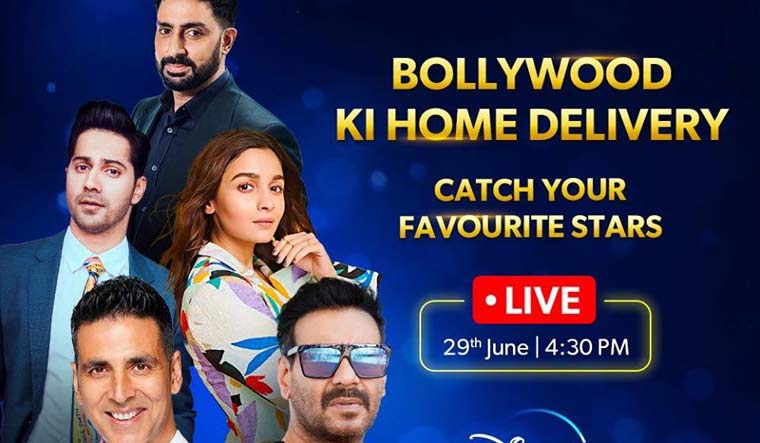 Superstar Akshay Kumar's Laxmmi Bomb, Sadak 2, featuring Alia Bhatt, and Ajay Devgn and Sanjay Dutt-starrer Bhuj: The Pride of India are among the Bollywood films that are headed for a direct release on the streamer Disney+ Hotstar as theatres remain closed due to the coronavirus pandemic.

The first film as part of Disney+ Hotstar Multiplex will be Sushant Singh Rajput's last movie Dil Bechara, which will start streaming from July 24. With an aim to honour the legacy of the late actor, the streaming platform is making the movie available to even the non-subscribers.

Other titles getting a direct release on the digital platform include Abhishek Bachchan-starrer The Big Bull, Vidyut Jammwal's Khuda Haafiz and Lootcase, featuring Kunal Kemmu and Rasika Dugal.

The initiative 'First Day First Show ki home delivery' by Disney+ Hotstar Multiplex is aimed at re-imagining the theatrical experience which has been at a halt from mid-March in the wake of the coronavirus-led shutdown.

These seven films will release between July and October on the streamer.

Akshay said Laxmmi Bomb was close to his heart as he is returning to the genre of horror-comedy after 2007's Bhool Bhulaiyaa.

He said it was his most "mentally intense" movie as he shared the posters of the film. The film also stars Kiara Advani, who previously worked with Akshay on Good Newwz.

Ajay said through this initiative people will once again start looking forward to new film releases.

"The corona pandemic threw all our comfort worlds into a tizzy. And, at the same time the OTT medium that was a fairly new phenomenon gained a huge significance as far as consuming entertainment is concerned. In the future, theatres and OTT will move in parallel," the actor said.

Alia, who stars in Sadak 2 which is the sequel to her father, veteran filmmaker Mahesh Bhatt's 1991 film of the same name, said the movie is very close to her heart. She also shared a message from her father.

"... It was my first time working with my father, which makes this a dream come true... These are extraordinary and difficult times and all of us are trying to get through it, taking each day at a time. My father always says that a filmmaker's destination is the audience's heart," she said.

Abhishek said there is nothing greater than the joy of being able to entertain someone through movies and great storytelling. He called his film "a story of ambition".

"And that's exactly what The Big Bull will do—it will keep audiences hooked till the very end," he said.

Shankar said as the team launches Disney+ Hotstar Multiplex today, they are yet again at the cusp of making a revolutionary change by bringing the biggest Bollywood movies directly to millions across the country.

"Theatres are a special experience. So, they will always exist and thrive. But the potential of the industry can't be capped by the number of release windows and theatres available.

"Our initiative will dramatically increase the number of films that can be made, giving film-lovers more films to enjoy and the creative community more films to make. We firmly believe that this will generate a massive momentum for more and different kinds of films to be made in India. It's a win-win for all," Shankar said.

Vidyut and Kunal, the two actors who were missing as representatives of their films from the press event, took to Twitter to express disappointment over their exclusion.

"A big announcement for sure!! 7 films scheduled for release but only 5 are deemed worthy of representation. 2 films, receive no invitation or intimation. It's a long road ahead. THE CYCLE CONTINUES," Vidyut said.

"Izzat aur pyaar maanga nahi kamaya jaata hai. Koi na de toh usse hum chhote nahi hote. Bas maidaan khelne ke liye barabar de do chhalaang hum bhi oonchi laga sakte hai. (Respect and love aren't demanded but earned. If someone doesn't give you that, it doesn't make us small. But we need a level-playing field so that we can also make a high jump)," Kunal said in what seemed to be a reply to Vidyut.

The pandemic has affected the release calender of Bollywood with producers looking at streaming platforms as an alternative.

Multiplex Association of India (MAI), and theatre chains PVR and INOX had expressed their disappointment at the decision of the filmmakers to skip cinema halls at the time of Gulabo Sitabo's release.