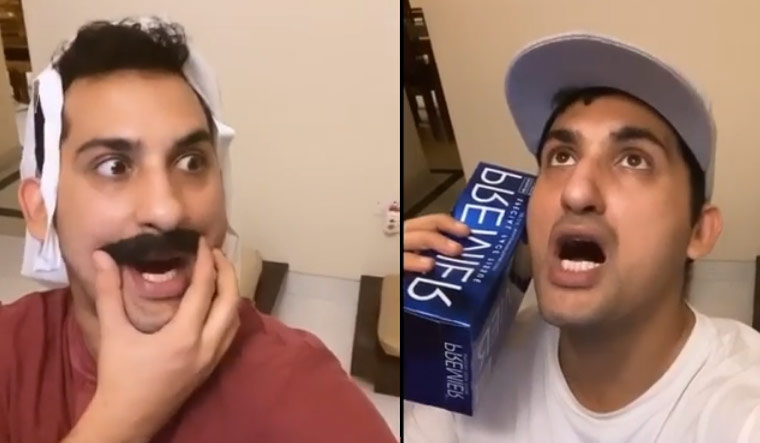 Indians owe a huge debt of gratitude to Danish Sait, whose comedy videos brightened up our lives during the lockdown and helped us get through it.

The Bengaluru-based comedian has taken the internet by storm with his lockdown videos, posted on Instagram and Twitter. In these videos, which are in the form of telephone conversations, Sait plays relatable characters drawn from real-life talking to each other in a variety of lockdown-induced scenarios—from Bengaluru boys desperate for alcohol to household help being induced to come to work by their employers.

In these 'phone calls', Sait uses anything he can lay his hands on as his mobile phone handset, be it a bottle, tissue box, paintbrush, broomstick, gas cylinder or even a bottle of rum.

His videos on Narendra Modi’s lockdown speeches have gone viral. Sait who struggled with the word ‘aatmanirbhar’ said in one of those videos, ‘’I want to buy one Hindi dictionary before his next speech.’’

In an exclusive interview to THE WEEK, Sait opened up about what he actually thinks of the PM’s speeches. Replying to a question on how he would rate PM’s lockdown speeches on a scale of ten, he said, ‘’I’d give him 8. He’s an incredible speaker. In fact, he’s one of the best orators I’ve ever seen. That said, I feel he takes too long to come to the point. Also, his Hindi is very textbookish. Otherwise, his speeches are damn good. Personally I don’t have a problem with him,’’ he said.

‘’Whatever decisions are taken by the government, I always manage to find my way around them. It helps being an independent artist. You can still work around whatever is there,’’ he added as an afterthought.

Though he hails from a political family, politics is not Sait’s forte. That did not stop him from playing a politician in the 2018 film Humble Politician Nograj.

However, as a citizen, he found the plate banging and candle lighting funny.

‘’Honestly speaking, for me it was about the solidarity. I think that’s what the PM was also hoping to achieve,’’ said Sait.

Conversations with my super market friend.

Sait’s videos deal with a wide variety of issues. In one of his videos which is in the form of a conversation between friends going vocal for local, one proudly says that ‘’I’m eating noodles with my hand.’

Sait’s mother was also featured in his Mother’s Day video capturing the woes of mothers, wherein she cribs ‘’My son is using me for his likes on Instagram.’’ In the skit, Sait plays Sushma—another mother—who was even more bitter. She says, ‘’I look at my son sometimes and wonder what monkey have I given birth to.’’ Pat came the reply from her friend, "Sushma, let’s not insult monkeys yaar.’’

The 32-year-old comedian made the most of the lockdown, uploading videos featuring people’s worries, anxieties and little joys in life. During the lockdown, his mom would cook for him so he could focus on making the videos. ‘’I just realised very early that I can’t cook. I’d do all the regular chores and this and that but I suck at cooking. My mom lives close by. She’s damn kind. When the lockdown was announced, she said, 'I’ll come and cook for you and you can do what you want.'"

He is no stranger to voicing unique and relatable characters. Prior to Humble Politician Nograj, Sait was famous as a radio personality in Bengaluru, whose prank call videos are still being circulated and shared on YouTube.

Sait always wanted to make videos but never had time. ‘’Now that I do have time, I’m making the most of it. I think I have always liked having the odds stacked against me. It brings out the best in me. It's about how you optimize limited resources,’’ he said.