The zombie horror series is streaming on Netflix 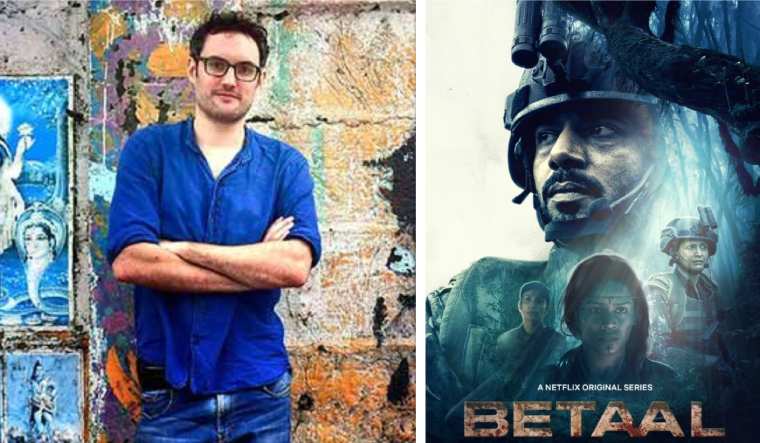 After Ghoul (2017), a dystopian horror series that drew inspiration for its ghost from Arabic folklore, creator Patrick Graham wanted to dip his toes into a zombie story, “something, which hadn’t been done before”. It seemed like a cool idea to explore redcoat zombies (undead soldiers belonging to the East India Company), and based on this, Graham had to find a theme, an Indian folklore that would fit into it.

“I needed a vampire kind of character who would be presiding over this army of zombies,” says Graham over a phone call, talking about his recent series, Betaal on Netflix. His search led him to the ghost ‘Betaal’, the roots of which could be traced back to the 11th century ‘Baital Pachisi’ in the compilation of Somdev Bhatt’s storybooks. “Apparently, Bram Stoker (author of Dracula) himself had based the description and depiction of his vampire out of the Indian spirit, ‘Betaal’. I instantly found that intriguing. I looked into it more, read about it and spoke to some experts in mysticism and folklore. I found that it (Betaal) was also a god worshipped in India quite widely, many hundreds of years ago, but not anymore.”

Graham, who has co-written the story along with Suhani Kanwar and co-directed it with Nikhil Mahajan, is continually fascinated by how everything literary in India has its set of ghost stories or spook stories, “that means you have an infinite well of ideas to draw around.” And yet, he is surprised that not much of that has been explored widely in the mainstream horror in India.

“In general, the mainstream horror we see in India tends to kind of focus on one thing,” says Graham, a British citizen who moved to India nearly 12 years ago in search of work and has now made it his home. He is happy because he is getting to explore so many different aspects of storytelling while also discovering the varied cultures.

Like in Ghoul, Betaal also revolves around a bunch of uniformed men and women. “That’s co-incidental,” Graham laughs as he says that after Ghoul, the first thing he wanted to pitch was about a haunted house. But there was The Haunting of Hill House and Typewriter already on the anvil, “too many haunted houses around”.

“A lot of the stuff I have watched growing up—Aliens and Predator—a lot of kind of genre films that involve soldiers and the military has been at the back of my head,” says Graham, adding that it also gave him an opportunity to explore action, gunfire etc.

The four-episode series is set in a remote village in Maharashtra where a two-century-old Betaal, a British Indian Army officer, and his battalion of zombie redcoats are unleashed. With Indian police pitted against the undead army, hapless villagers are trapped in a horrific conflict. Unlike the closed-door Ghoul, Betaal moves out in the open. “While shooting Ghoul in the basement, I kept thinking that my next project would be somewhere exterior which isn’t stinky like this basement,” says Graham, who jumped into the outdoors exploring places like Igatpuri and Tiger Point of Lonavala.

“We wanted to be experimental. Tanay (Satam, DOP) and I made sure that the show looked like nothing else out there. That it has its own recognisable specific aesthetics. We always wanted to be quite extreme, stylised and experimental in how we were taking every shot.”

The move from the interiors to the outdoors is not the only one that Graham has made. While Blumhouse and Ivanhoe remain constant collaborators in this Netflix production, it is Shah Rukh Khan’s Red Chillies Production that is a new collaborator for Graham. Having worked extensively with the erstwhile Phantom Films and finding a great mentor in Vikramaditya Motwane, Graham was initially a little apprehensive of setting foot into a new production house, not sure how Red Chillies would be. But he was in for a surprise with the kind of support he got. The first time he met Khan for the narration along with the co-collaborators, he was surprised with the attentiveness of the actor.

“The attention that he gave to the story was unmatched. He also had some really good script advice that we factored in the story. He was a great support throughout the production process, boosting the morale of the team every now and then,” says Graham, confessing that he has pinched himself several times to believe that he, a village boy from London, has worked with Khan, “one of the greatest superstars of our times”.