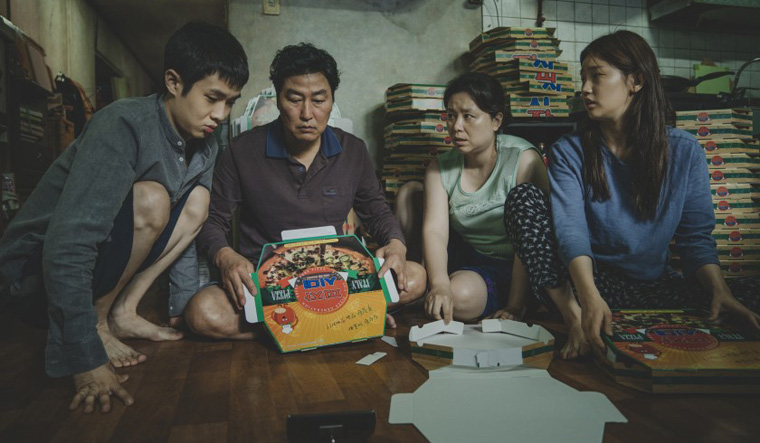 A scene from 'Parasite'

Director Bong Joon Ho's Parasite scripted history at the Oscars by becoming the first South Korean film to be nominated and win in the international feature category at the 92nd Academy Awards. It was the second Oscar win of the night for the film, a twisted class satire that defies genres in trademark Bong style. The director and his co-scribe Han Jin-won have already received the best original screenplay Oscar.

Parasite is a stinging portrayal of class struggles set in South Korea. The class satire—about two families at each end of the social spectrum and their points of collision and intersections leading to sometimes comic but ultimately tragic results—is nominated in the categories of best picture, best director, best production design, best original screenplay, best foreign film and best editing. The film, made on a budget of $11 million, has become one of the top grossing foreign films of all time, earning $165 million so far and counting.

The director lauded the Academy of Motion Picture Arts and Sciences for renaming the category in an attempt to be more inclusive. "The category has a new name now from best foreign language to best international feature film. I'm so happy to be its first recipient under the new name. I applaud and support the new direction that this change symbolises," the director said.

"I'm bloody ready to drink tonight," he added amid a round of applause and laughter from the audience. It is yet to be seen whether the film, which entered the competition with six nominations, manages to win the top awards of the ceremony, the best picture and director but its win in the international category was a sure shot.

South Korea has been submitting its entries for the award, which was earlier called best foreign language film, since 1962. Parasite was pitted against Pain and Glory (Spain), Les Miserables (France), Corpus Christi (Poland) and Honeyland (North Macedonia).

Filmmaker Taika Waititi bagged the Oscar in the adapted screenplay category for the satirical anti-war film Jojo Rabbit. Waititi became the first indigenous person to ever win the Oscar for best adapted screenplay. An overwhelmed Waititi thanked his mother for introducing him to Christine Leunens's book Caging Skies, that served as the basis for Jojo Rabbit.

"Amazing, thank you. I like to thank my mother for being my mother and for giving me the book that I adapted. This wouldn't have existed without you doing that. Thank you to the producers of the film... There are many people I want to thank but won't because I can't remember them.

"This is really great and I dedicate this to all the indigenous kids in the world who want to do art and dance. We are the original storytellers and we can make it here as well," the 44-year-old filmmaker said.

Superstar Brad Pitt, who has been this award season's darling with his funny, self-deprecating speeches, won his maiden acting Oscar for his performance as stuntman Cliff Booth in Quentin Tarantino's Hollywood memory capsule Once Upon a Time in Hollywood.

The 56-year-old actor was recognised in the best supporting actor category for his role in the 1960s-set drama, which received a total of 11 nominations at the 92nd Academy Awards on Sunday night.

The win marks the first acting Oscar for Pitt, who took home the trophy as the producer of best picture winner 12 Years a Slave in 2014.

Pitt, who was presented the trophy by last year's best supporting actress winner Regina King, dedicated his award to "one of a kind" and "original" Tarantino, co-star Leonardo DiCaprio, Hollywood's stunt people and his children.

"I loved the ethos of Cliff Booth. Look for the best in people, expect the worst but look for the best. Leo, I will ride on your coattails any day man," Pitt said in his acceptance speech.

The actor was up against acting giants Anthony Hopkins (The Two Popes), Joe Pesci (The Irishman), Al Pacino (The Irishman) and Tom Hanks (A Beautiful Day in the Neighborhood).

Pitt, who has had a great 2019 courtesy Once Upon... and James Gray's Ad Astra, impressed both the audiences and critics with his portrayal of Booth, whose dangerous side hides beneath an easy-going persona.