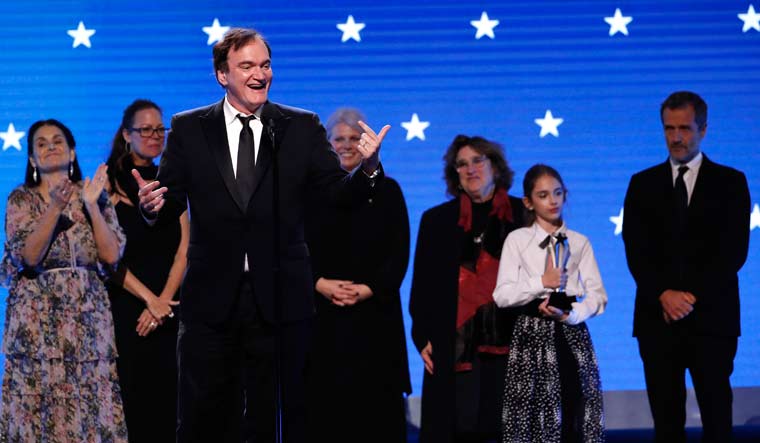 In the Sunday night ceremony, Joker star Joaquin Pheonix continued his winning spree after Golden Globes as he took home the best actor award for his performance in the Todd Phillips directed movie on the DC supervillain, while Renee Zellweger won the best actress honour for Judy.

Tarantino won the best original screenplay for Once Upon..., while Greta Gerwig received the best adapted screenplay award for her critically-acclaimed historical period drama Little Women based on Louisa May's 1868 novel of the same name.

Kristen Bell also received the #SeeHer Award, which recognises a female actor who pushes boundaries and changes stereotypes in entertainment to accurately portray the women characters.

Bombshell once again topped the 'Hair and Make Up' category, while Avengers: Endgame got the best visual effects award. The Marvel Studios project was also announced the best action movie of the year.

The second tie of the year was in the best song category for which both Glasgow (No place like home)" from Wild Rose and Rocketman's "(I'm gonna) Love me again" were awarded.

Fleabag creator-actor Phoebe Waller-Bridge was also honoured with the best actress in a comedy series award for her much-loved portrayal of the titular character. British actor Andrew Scott, who impressed the audience worldwide with his 'Hot Priest' in the dark-comedy received the best actor in the supporting role in comedy.

The best actress in supporting role in comedy trophy went to Alex Borstein for The Marvelous Mrs. Maisel.

When They See Us star Jharrel Jerome took home the best actor in limited series or movie made for television award, as Michelle Williams registered another big win "Fosse/Verdon" after Golden Globes. Under the same section, Stellan Skarsgard got the best supporting actor trophy for Chernobyl and Toni Collette won the best supporting actress award courtesy Unbelievable.

BoJack Horseman was given the best animated series honour. It was also a tie in best talk show category as The Late Late Show with James Corden and Late Night with Seth Meyers both received the award. Best comedy special trophy went to "Live in Front of a Studio Audience: Norman Lear's All in the Family and The Jeffersons".