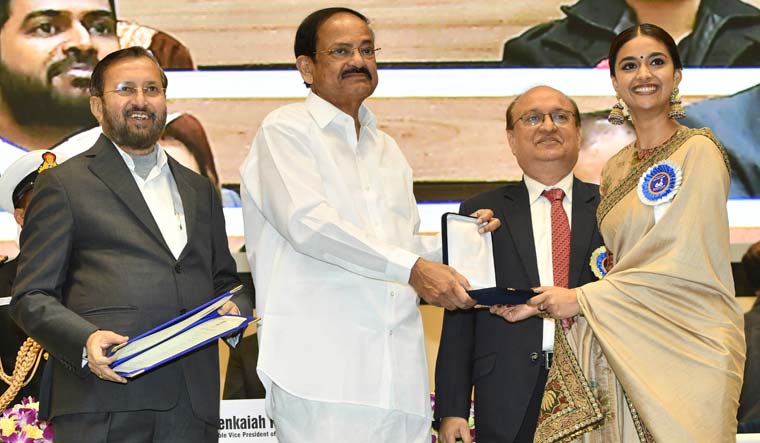 Megastar Amitabh Bachchan, who was supposed to receive the Dadasaheb Phalke Award at the ceremony, skipped the event citing ill health. The 77-year-old actor will now be honoured by President Ram Nath Kovind on December 29 at a high-tea, to be hosted at Rashtrapati Bhavan for the winners.

Naidu said he was happy that films which were recognised at the 66th edition of National Film Awards broke stereotypes and attacked superstitions.

"The feature films this year are as much about emotions as they are about intelligence. In the banquet of films, we have films that break stereotypes and attack superstitions sensitively. We see through the makers' imagination the orthodox traditions giving way to modern solutions," Naidu said during the ceremony.

He also praised non-feature films for dealing with a wide range of subjects such as female infanticide, human trafficking and adoption.

"I always believe that cinema is a soft power of a strong India. The influence of this soft power is visible when I go to other countries. The culture and art of a country is its power and we need to present this power to the whole world," he said.

Ayushmann and Vicky, who won the best actor award for their work in "Andhadhun" and "Uri: The Surgical Strike", attended the ceremony with "Pad Man" star Akshay Kumar.

Both best actor winners later took to Instagram to express their gratitude.

Keerthy, the winner of best actress award for Telugu star Savitri's bilingual biopic "Mahanati", was elated to get the recognition.

"I feel blessed and honoured to receive the National Award for a film which is so close to my heart," the actor said.

Apart from Vicky, director of "Uri...", Aditya Dhar, also won his first National Award for directing the film based on the 2016 Indian Army's surgical strikes on terror launch pads in Pakistan.

"It is the best feeling. Since childhood whenever I used to think about getting into films, the first thought that would come to my mind was to win the National Award one day and receiving it for my debut film is surreal," Dhar said.

Director Abhishek Shah said as a feminist, it was great to receive the award for a subject that he is so passionate about.

"It's overwhelming. I never imagined we will get so much love. Audience loved the movie and critics appreciated it. It all feels like a dream," he said.

For her portrayal of cantankerous yet sympathetic matriarch in the film, veteran theatre and film actor Surekha Sikri won the best supporting actress award.

The wheelchair-bound actor, who received a standing ovation, said it was an emotional moment for her.

"National Award is a big honour and getting standing ovation was a very emotional moment for me. This love has added years to my life," Sikri said.

"I never thought that I will get this honour for acting in a small film like 'Chumbak'. National Film Awards don't discriminate between Hindi or regional films or big and small films. I'm happy that I got this award for a Marathi film," Kirkire said.

The award for the best Hindi film was presented to "Andhadhun", directed by Sriram Raghavan.

"I'm very happy. I didn't expect all of this. The movie got a lot of love last year, so more love is always good," Raghavan said.

"'Padmaavat' has had a journey of its own and that has made this film even closer to my heart. The film's music was something I personally loved," Bhansali said in a statement.

In the non-feature film category, 22 titles were given the National Film Award.

A source close to the jury said "Sudani From Nigeria" director Zakariya Mohammed and "Swimming Through The Darkness" director Supriyo Sen boycotted the ceremony in protest against the amended citizenship act.