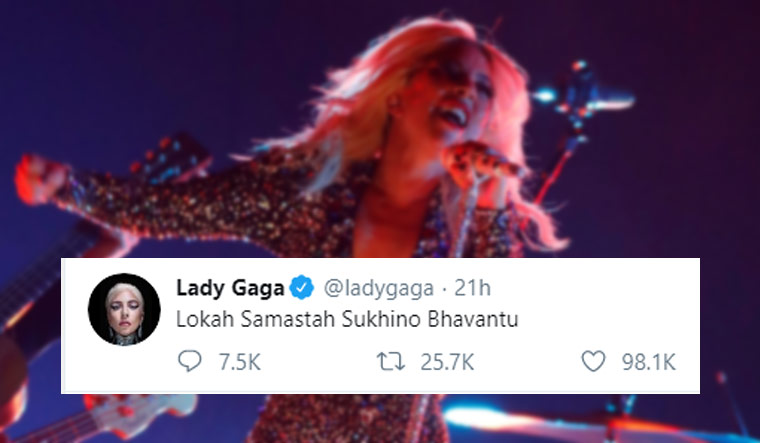 Fans of pop superstar Lady Gaga saw a curious tweet from her on Sunday: the words, "Lokah Samastah Sukhino Bhavantu."

A Sanskrit phrase, often chanted at the end of a yoga session or a prayer, it means, "May all beings everywhere be happy and free, and may the thoughts, words, and actions of my own life contribute in some way to that happiness and to that freedom for all."

Gaga was recovering from a bad fall she sustained during a concert held on October 18, when she straddled a fan and fell off the stage at a show in Enigma, Las Vegas. Still in recovery, the star decided to offer a blessing to her millions of fans across the world.

Her tweet had nearly 100,000 likes and over 25,000 shares as of Sunday evening, with many Indians taking  it as an act of validation for the study of Sanskrit, with one user tweeting, "lady gaga did more for Sanskrit than NCERT."

Others took a stronger stance on teaching Sanskrit in schools, with scholar Hindol Sengupta tweeting, "Imagine even Lady Gaga is tweeting in Sanskrit. Surely now we can have a consensus on Sanskrit as a compulsory subject in every Indian school?"

How Gaga stumbled onto the phrase is a mystery for now, although there is a chance she heard the song by the same name from the album, The Global Mukti Project.