FRIENDS @ 25: Rachel Green, the fashionista of our times

Ralph Lauren is coming out with a Rachel Green-inspired collection 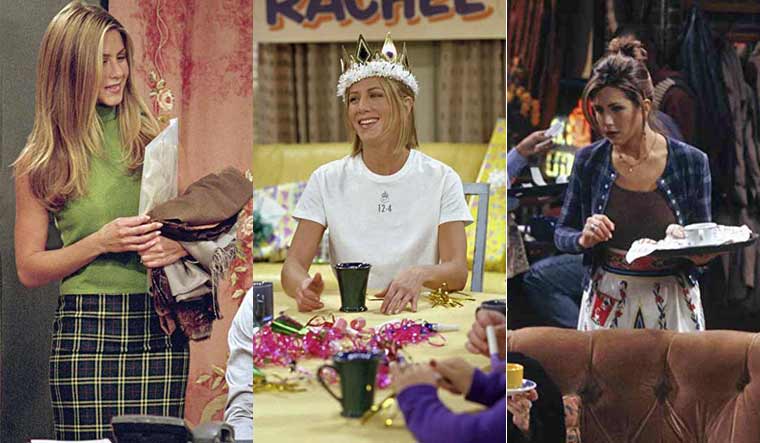 Popular looks of the character Rachel Green from the show | Imdb

I grew up on a steady dose of Rachel. Of course, all the characters of FRIENDS were adorable in their own way. But if I were to pick one, it would be Rachel. Or Joey, but that level of dim-wittedness only looks good on television. Rachel, on the other hand, seemed like your everyday girl-next-door. Although chances are that the girl who lives next door to you does not have hair that glints gold when the light falls on it. Or a love-hate relationship with a palaeontologist. Or a body so great that a rug wrapped around it would look like haute couture.

Perhaps that is why Ralph Lauren is coming out with a Rachel Green-inspired collection just as the 25th anniversary of the iconic sitcom nears. It turns 25 on September 25. After all, Rachel worked for Ralph Lauren in the last five seasons of the show and the least the designer could do was pay homage to the character, who probably made the label a household name. The collection is called ‘Wear to Work’ and includes roll-neck tops, pin-striped suits and midi skirts.

Ah, remember those midi skirts? Although, Rachel kind of grew into those skirts. She started off with the mini waitress skirt. Only she could make an apron worn over the skirt look fresh off the runway. She wore it with such aplomb and sex appeal. That apron must have been the downfall of many a hormone-pumped man.

And that was just the thing about Rachel. She could look beautiful in a sleek sheath dress, an LBD or a vintage two-piece suit. Didn’t she look darling in that green, sleeveless, turtleneck top and chequered pencil skirt? (Ralph, got any of those in your collection?) That was when she was trying to beguile her beguiling assistant, Tag Jones. But she could just as easily carry off a pair of baggy cargos with a tank top or overalls with a blazer. Remember that bygone era of dungarees? Although it has more or less assumed pride of place in fashion’s hall of rejects, Rachel could pull it off without looking like the neighbourhood billboard painter.

I loved everything she wore, even the green pyjamas she woke up in on her 30th birthday. She is depressed about being 30 and single. Her boyfriend Tag is of no comfort as he tells her he is also worried about ageing. He’s afraid to turn 25. (What a douche bag!) It is one of the most depressing episodes of FRIENDS, especially when Ross points out that in 10 years, they are all going to turn 40 (at which Joey promptly bursts into tears!). But Rachel has the best solution to her turning 30. “Y’know,” she says, “I’m still 29 in Guam”. Isn’t that a very Rachel thing to say? Somehow, the fact that she does it in pyjamas makes the moment poignantly bittersweet. To us, Rachel, you’ll always be 30!