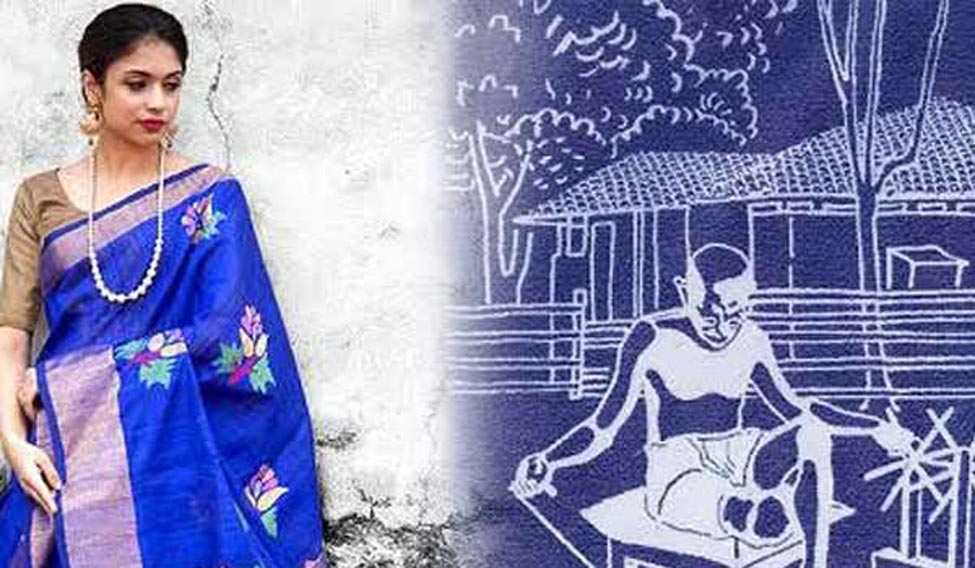 Right from playing a key role in India's Freedom struggle to making India a treasure chest of fashion, Indian Handlooms have been an integral part of Indian culture and economics. This 70th Independence day, Unnati Silks celebrates some major achievements of our pride - Indian handlooms.

India, under colonial rule for a little above two hundred years attained its freedom in 1947. And the non-cooperation movement by Mahatma Gandhi in 1920 was a major milestone. He urged Indians to wear hand-woven Khadi. Since then, Handlooms have formed an integral part of our Freedom struggle.

Handlooms are the spirit of the nation - the vibrancy and vividness in their display reflecting the ethos of India, its rich culture and the underlying chord of unity within the diversity.

Weavers, artisans and other ancillary craftsmen are the backbone of the Indian handloom industry which demonstrates the richness and diversity of Indian culture.

With over 4.3 million people directly involved in the production, the handloom industry is the second-largest employment provider for the rural population in India after agriculture. Indian handloom products are known for their unique designs and finesse. The trend is to mix old designs with new techniques and create original products.

The industry has strong infrastructure, with about 2.4 million looms of varied designs and construction, indicating significant production capacity.

Remuneratively handlooms fetch much less as compared to power looms and govt. policies and schemes started favouring this sector and neglected the other. This caused a temporary setback and numbers in the workforce started dwindling seeking fresher pastures to eke out their livelihood.

Handloom day on August 7 every year, the initiative from Prime Minister Narendra Modi himself, is an acknowledgement of this 'Hand of the Loom' or the weaving community's contribution to the nation's economy and the preservation of India's rich heritage.

As a move it has many pro-handloom initiatives afresh and given the much needed shot in the arm that promises better things to come for this troubled sector.

As per the official figures from the Handloom Export Promotion Council (HEPC), the contribution of Handloom sector in Indian exports is quite significant and worthy of applause.

In 2015-16, the US was the major importer of Indian handloom products, with estimated purchases of USD 106.13 million, followed by the UK and UAE at USD 22.42 million and USD 19.42 million, respectively. Italy, Germany, France, Spain, Japan, Netherlands, and Australia were some other export destinations.

Indian Handlooms have made a deep impact on the Fashion trends. Some of the leading Indian designers like Ritu Kumar, Sabyasachi Mukerjee, Manish Malhotra, Tarun Tahiliani, Anamika Khanna, Anju Modi extensively incorporate handloom weaves and art work in their collections.

Starting from fabric, right down to designs and motifs, they have given the handloom that fresh boost that has elevated it from a traditional weave to a fashion fabric.

But more heartening is it to see the spread of the handloom in fashion clothing overseas. Some of the biggest designer brands have incorporated designs, patterns, styles, and sometimes even the fabric itself from the Indian range of clothing.

McQueen Fall 2008 is inspired by Indian royal costumes and jewellery for this collection. Knee-length draped sari dresses with paisley work at the borders, a voluminous white dress with a red shrug with gathered effect, use of India's national bird peacock as a motif and the use of maangtikas.

Dior Resort 2008 is a tribute to the Indian colour palette and experiments with shades such as bright greens and pinks in this collection, the use of paisley, temple motifs, embroidery on silk and chiffon to create pencil pants, skirts and dresses is fascinating.

The combination of British and Indian influences, specifically the royalty of both countries by Alexander McQueen in his Fall 2008 collection was a breath taking fantasy. From Victorian and Elizabethan silhouettes to the ornamentation of Indian maharajas, McQueen's collection was dark and romantic. The use of Indian jewellery on gothic looks, sari silks to create dresses, embroidery of Indian motifs like the peacock on frothy gowns among other details were sensational.

Marchesa had in her Spring 2013 range Indian drapes mimicking the sari and long, full skirts to the use of brocade and the jewelled and gilded embellishments on clothes. The collection seamlessly blended its Indian influences with the dreamy Marchesa aesthetic. The Indian touch was also visible in the colour palette that included deep red, Rani pink, sunset orange, pale green and inky blue.

Isabel Marant in her Spring 2016 Collection had a perfect blend of the Parisienne vibe with that of a bohemian globetrotter. The woven textiles of Rajasthan were used alongside chunky jewellery, laid-back harem pants, silver jackets and pants, and beaded embroidery.

Elie Saab Couture had in is Spring 2016 display showed the collection of an aristocrat visiting colonial India. With both Indian and Edwardian influences in equal measure, sari-inspired silhouettes were followed by high-necked shirts, Nehru collars by caped gowns. The clothes were feminine, intricate and beautiful, all staple features of Elie Saab couture.

All goes to show how much those overseas like about the variety & diversity in handlooms that gives them plenty of inspirations.

Change is a constant phenomenon. And to change without losing the core values and essence is what Indian handlooms stand for. The core techniques and principles used by the weavers remain the same which has been carried on from generations. The passion, dedication and love for the craft still remains the same, the magic remains the same.

Unnati's contribution to the Nation's effort began in 1980 when Devendra Ladha, CEO and founder of Unnati Silks had to make a choice other than medicine for his future career. He chose to start Unnati Silk Prints Pvt Ltd.

Right from his student days, Ladha had developed a love for handlooms.

"I was very much taken in by the traditional processes of weaving, the dedication of our weavers, intricate designs, the beauty and detail of the weaves. I love Indian ethnic like any proud Indian should. Traditional artistry is a marvel, a work of genius", he says, "but the ethnic practitioners behind this craft 'never get their place in the sun' for the marvellous offerings they create," he said.

"Unnati Silks sees itself as the bridging entity between these wonder workers of ethnic fabrics across India and the end users of these dedicated offerings - the buying community at large. There have been areas that I feel should be covered, like holistic conceptualisation, an innate understanding of market tastes through focused research, good anticipation through co-ordinated efforts and experience of what designs could be well-received and a whole lot of other customer centric efforts that would ensure a win-win situation for all concerned," added Ladha.

This became a focal point in Unnati's strategies that tremendously improved its bonding with the traditional makers of fabrics and fostered a close working relationship that has been harmonious and well-nurtured in this journey. In return the market has responded favourably on most occasions for Unnati's ideas translated on cloth.

"The smell of a freshly woven handloom saree is as invigorating as the smell of the mud when it just starts raining, something familiar and dear to those who have been associated with these weaves," said Ladha.

Your form could not be submitted.
This browser settings will not support to add bookmarks programmatically. Please press Ctrl+D or change settings to bookmark this page.
Topics : #Independence Day | #fashion