The meeting begins in Gandhinagar on Monday 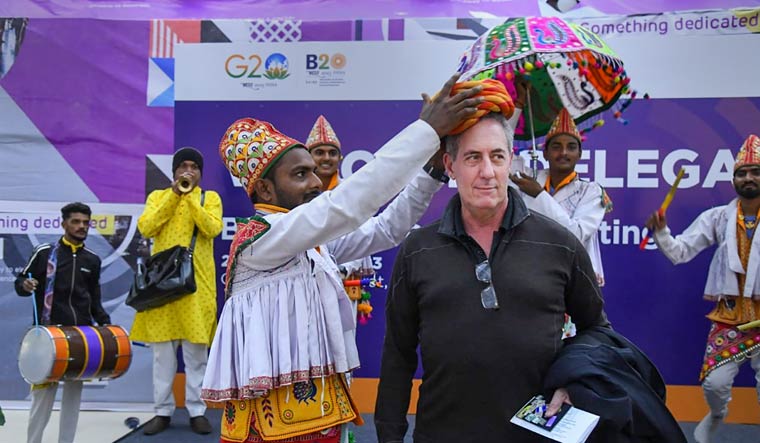 Delegates arrive for the B20 meeting in Gandhinagar | PTI

Climate change, global digital cooperation and issues like innovation will be debated as nearly 600 delegations from India and across the world meet at the Mahatma Mandir in Gujarat's Gandhinagar on Monday in the Business 20 (B20) inception meeting being organized as part of India’s G20 presidency.

Mona Khandhar, principal secretary, finance, Gujarat Government said in Ahmedabad that three-day meet will begin with a cultural programme and a visit to Dandi Kutir for the delegates. While Monday will be power packed with meetings, on Tuesday the delegates will be taken to GIFT City. They will also have a yoga session.

Those present in the meetings will include Union Commerce Minister Piyush Goyal, Gujarat Chief Minister Bhupendra Patel and Tata Group chairman Natarajan Chandrasekaran, who is also the chairman of B20 India. Leading business tycoons and dignitaries across the world will also be present.

Khandhar said B20 is the official dialogue forum established in 2010 and is among the most prominent engagement groups in G20. It has companies and business organizations as participants.

The B20 dialogue in India is taking place under the theme of “RAISE” (Responsible, Accelerated, Innovation, Sustainable and Equitable businesses).

Out of the 200 meetings to be organized as part of the G20 presidency in India, 15 will be held in different parts of Gujarat.

Khandar said that in the last session of the meeting, Gujarat will make a presentation on the lead and progress it has made on the themes discussed. Citing an example, she said Modhera has been declared the first solar village in the country. Not only the electricity bill of the villagers is coming zero, the villagers are also generating revenue from the excess electricity that they give to the state government.

State government officials said that a special counter is being set up during the event to promote millets as part of the International Millet Year.