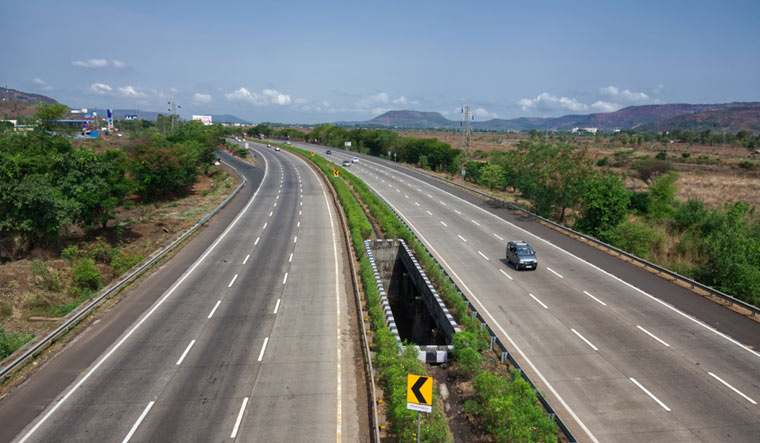 Building infrastructure has been a key feature which marked continuity between the NDA governments headed by prime ministers A.B. Vajpayee and Narendra Modi. The pace of building highways and infrastructure projects have picked up, particularly, in the last three years, as government sees them as means to keep the economy in shape.

The BJP run think tank, Public Policy Research Centre, in its reports says that despite the pandemic, the government has constructed record 13,298 km of highways in the last financial year, with a record of 37 km per day in 2021 from 11 km per day till May 2014. The Centre has come out with various reports on government's initiatives in the last eight years. The think tank has emerged as a sounding board for the government and the party on key policy issues.

“The Narendra Modi government set a Guinness World Record by constructing a 2.5 km 4-lane concrete road in 24 hours, as well as a 1-lane 25-km bitumen Solapur-Bijapur Road in 24 hours, and the most remarkable achievement was the pace of highway construction in the country that reached a new high of 37 km per day in the financial year 2020-21,” report said.

The report makes mention of an Indian Air Force aircraft, which with two ministers on board, conducted a mock emergency landing on the national highway. “This was the first time that a national highway (NH-925) was used for emergency landing of IAF aircraft. Apart from the Emergency Landing Strip, three helipads (each measuring 100 x 30 metres) have been built in Kundanpura, Singhania, and Bakhasar villages as part of this project, which will serve as the foundation for strengthening the Indian Army and security network on the country's western international border.”

The report said that the Railways ministry has reached its electrification goals under which three of its zones are now 100 percent electrified. “The punctuality of Mail and Express trains has been increased to 92.55 percent during 2021-22 with massive increase in capital expenditure of Rs. 10.68 lakh crore in 2022-23 (2.9% of GDP).”

Referring to the work done in the shipping sector, the report said the ministry aims to make India as a hub of ship recycling with accession to the Hong Kong convention. “India is the 16th largest maritime country in the world which has 12 major and 205 notified minor and intermediate ports. The capacity of major ports, which was 871.52 million tonnes per annum (MTPA) at the end of March 2014, has increased to 1,560.61 MTPA, a 79% increase.”

The PPRC report added that during the period from April 2014 to January 2021, the installed Renewable Energy capacity of India has increased by 2.5 times, and in the same period, the installed solar energy capacity has increased 15 times. “Globally, India stands 4th in Renewable Energy power capacity, 4th in Wind power, and 5th in Solar Power capacity. India is the only country among the G20 nations that is on track to achieve the targets under the Paris Agreement.”