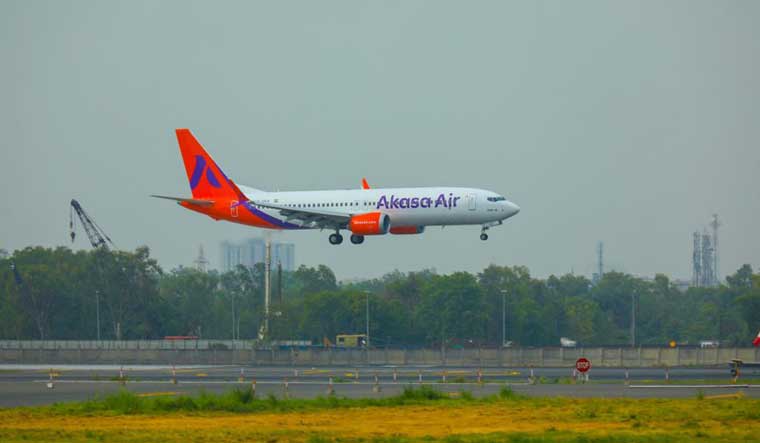 Set to breathe new life into India's post-Covid travel industry, new airline Akasa's first aircraft reached Indian shores Tuesday morning. Though a date has not been set, it is expected that the airline promoted by stock market 'big bull' Rakesh Jhunjhunwala will kickstart bookings quite soon.

The Boeing 737 MAX aircraft, from a total order of 72 planes that Akasa is buying for its ultra low-cost carrier (ULCC) business model, was handed over to the airline last week from Boeing's base in Seattle, in the US. The plane was then flown to Iceland over the weekend, where after refuelling, it touched down at Delhi's Indira Gandhi International Airport.

Akasa's leadership team, including CEO Vinay Dube were present as the aircraft in its bold orange-and-purple livery landed in Delhi. “(This) marks an important milestone, bringing us closer to our vision of building India’s greenest, most dependable, and most affordable airline,” said Dube.

“We are proud to partner with Akasa Air as they embark on their journey towards making air travel inclusive and affordable for all,” said Salil Gupte, president of Boeing India. “India is one of the fastest-growing economies in the world and offers enormous growth and productivity opportunities for the aviation industry.”

The aircraft will be initially used for test flights and completing formalities required by the Directorate of Civil Aviation (DGCA) before it gets its air-worthiness certificate, a precursor and pre-requisite to operate services.

Back-from-bankruptcy Jet Airways, now promoted by the Jalan-Kalrock consortium, got its air worthiness certificate last month. The two 'new' airlines starting operations in the coming days is expected to provide a fillip to domestic air travel, which had suffered greatly over the past two years due to Covid restrictions, but is now on the revival path to normalcy.