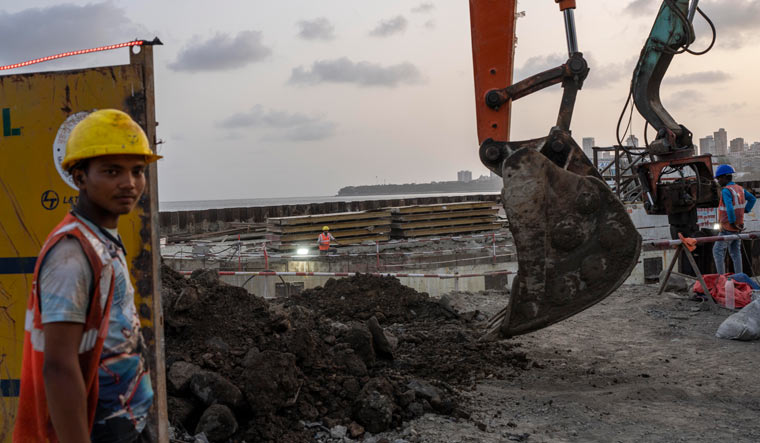 The Indian economy grew at its slowest pace in a year during January-March, pulling down the GDP growth in the full fiscal 2021-22 to 8.7 per cent as Russia's invasion of Ukraine added a new inflation hurdle to the recovery.

The gross domestic product (GDP) expanded by 4.1 per cent in the final quarter of 2021-22, according to data released by the statistics ministry.

This was lower than the 4.8 per cent growth the Chinese economy saw in the quarter.

For the full year (April 2021 to March 2022), India's economic growth of 8.7 per cent was lower than the 8.9 per cent the ministry had projected three months back.

First, the virus-related curbs and then the war in Ukraine added to higher commodity prices and supply squeeze.

Economists said the outlook for the current fiscal year remains clouded as global crude oil prices have hardened back to USD 120 per barrel after increased sanctions on Russian oil.

Momentum in the services sector will be one of the key drivers apart from the government's focus on enhancing public capital expenditure.

High inflation had led to the Reserve Bank raising the benchmark interest rate by 40 basis points in an unscheduled review. It is expected to take similar measures when the Monetary Policy Committee meets for the bimonthly review on June 8.

Government's Chief Economic Adviser V Anantha Nageswaran ruled out the risk of stagflation in India as the country is better placed than other nations.

Stagflationary risk to India is quite low compared to other countries, he said.

Stagflation is the phase when both inflation and unemployment rates are high with moderation in GDP growth.

During Q4, private consumption expenditure grew by 7.9 per cent, reflecting some impact of pent up demand. There was also a revival in contact-intensive services in the last quarter which has helped the GDP print reach respectable levels.

The GDP had grown by 2.5 per cent in the January-March quarter in the previous year.

Crude oil output has been weak for quite some time and has been in contraction now for 53 months. This means the country's dependence on global crude oil will be even higher, which is on the boil leading to imported inflation and its associated consequences for the economy.

Rumki Majumdar, Economist, Deloitte India, said the difference between the real and nominal GDP suggests that inflation has been a persistent problem, and the economy has been fighting the challenge of rising prices for a long time now.

"Government's intervention in the form of duty cuts on imports, subsidies on fertilisers and cooking gas, duty cuts on fuels to protect consumers and businesses from high inflation is likely to impact the fiscal deficit in the coming quarters."

Gross value added (GVA) growth during the fiscal ending March 2022 was at 8.1 per cent as against a contraction of 4.8 per cent in the preceding year.

The GVA growth in the manufacturing sector accelerated to 9.9 per cent during the year as against a contraction of 0.6 per cent earlier.

GVA growth in both mining and construction was 11.5 per cent. These two large segments of the economy had contracted in the COVID-hit 2020-21.

However, agriculture sector growth decelerated to 3 per cent from 3.3 per cent in FY21.

Electricity, gas, water supply and other utility services segment grew by 7.5 per cent during 2021-22. The segment had contracted by 3.6 per cent in the previous fiscal.

GVA growth in services sector -- trade, hotel, transport, communication and services related to broadcasting -- was 11.1 per cent during 2021-22 as against a contraction of 20.2 per cent in the previous year.

Financial, real estate and professional services grew by 4.2 per cent in the year over 2.2 per cent earlier.