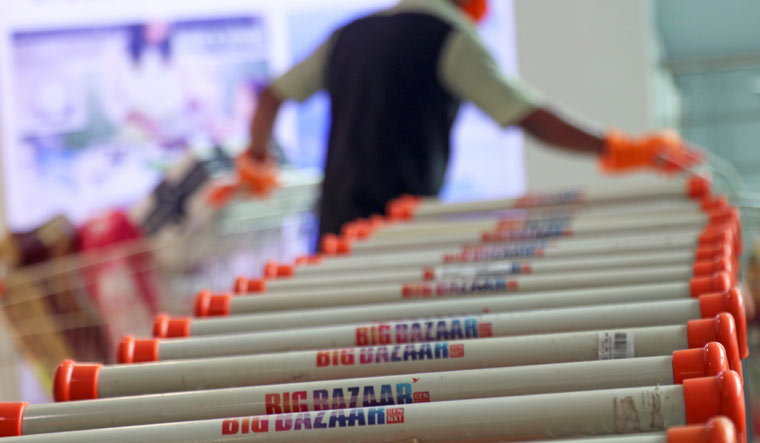 Worried over the falling share price and concerned over further losses with the company likely to be referred to the insolvency and bankruptcy court, shareholders of Future Retail have written to the markets regulator Securities and Exchange Board of India urging it to initiate steps to protect shareholder interests and also initiate a probe against key executives of the company, which is currently fighting a case with e-commerce giant Amazon.

Proxy advisory firm InGovern Research Services too has written a separate letter calling for a forensic audit of the company.

Kishore Biyani-promoted Future Retail was hit hard by the Covid-19 pandemic. In August 2020, it struck a deal with Reliance Industries to sell its retail, wholesale and logistics business for Rs 24,713 crore. This deal was crucial for its survival. But, it was opposed to by Amazon, which had earlier acquired a 49 per cent stake in a promoter group company Future Coupons. Its allegations were that this deal prevented Future Retail from selling its assets to certain entities including Reliance.

Over the past 18 months plus, the two sides have fought a bitter battle in courts in India and Singapore. Meanwhile, Reliance Retail suddenly took over more than 900 stores of Future Retail, including Big Bazaar hypermarkets, in February.

On February 26, Future Retail said it was scaling down its operations, which would help in reducing losses. Then on March 9, it said it had received termination notices in respect of 835 properties sub-leased from Reliance. Separately, Future Lifestyle Fashion said the same day that it had received termination notices for 112 stores. These stores had contributed to 55-65 per cent of the retail revenues of the company.

It  emerged that store owners had cancelled Future Retail’s lease agreements after the later had failed to pay rents earlier and in turn these stores had been leased to Reliance Retail. Reliance started taking over the stores after Future Retail failed to pay the sub-leases.

Amazon cried foul and termed this takeover as fraud. Bankers too were angry as they had the first right over the assets inside the stores. Last month, after the secured creditors to Future Retail rejected the deal, Reliance called it off.  That leaves Future Retail with an uncertain future, as there is no more a deal with RIL and half of its stores are gone too.

Bank of India, which is the lead banker in the consortium of lenders to Future Retail, has already initiated insolvency proceedings against the company in April after the retailer failed to make its scheduled debt repayments.

In case the company lands in the bankruptcy courts, shareholders will not get anything. Already, Future Retail shares have crashed near 79 per cent from their 52-week high of Rs 76.25 touched on June 16, 2021.  On Wednesday, the stock traded at Rs 16.10, down 4.7 per cent.

At the end of the March 2022 quarter, while promoters held 14.31 per cent stake in Future Retail, public shareholders held 85.69 per cent stake.

Vijay Kulkarni, an advocate and a Future Retail shareholder, said the transfer of assets and leasehold premises has resulted in “unprecedented loss” to shareholders, banks and other stakeholders.

He also pointed to the fact that several managerial personnel and directors had left the company since March and has requested a probe against the company at the earliest opportunity.

“Considering the urgency of the matter and since more than 80 per cent loss has been suffered by the investors, you are requested to order probe against FRL and all concerned key managerial personnel for the purpose of ascertaining true facts and also to punish all concerned appropriately and protect interests of shareholders,” Kulkarni said in the letter to SEBI written on behalf of several shareholders.

Sadhashiv Nayak, who had been appointed the CEO of FRL in August 2021, resigned on March 31, 2022. The company has also seen the exit of three independent directors over the last several months. The resignations suggested that “all is not well” within the company and the Future Group, irrespective of the ongoing dispute with Amazon, said InGovern managing director Shriram Subramanian in his letter to SEBI, which THE WEEK has seen.

The letter has also been marked to the Reserve Bank of India, ministry of finance and the Competition Commission of India.

“SEBI, as the market regulator, needs to take into account the changes in directorships and institute a forensic audit of the accounts of the company,” said Subramanian.

He also alleged that the company had undertaken a number of related party transactions in March 2021, which were “detrimental to the interests of minority shareholders.”

He wants the regulator to appoint an audit firm to institute a forensic audit of the company’s accounts and also track and make full disclosure of the related party transactions of group companies.

Amazon too in the past has called on the regulator to investigate Future Retail.