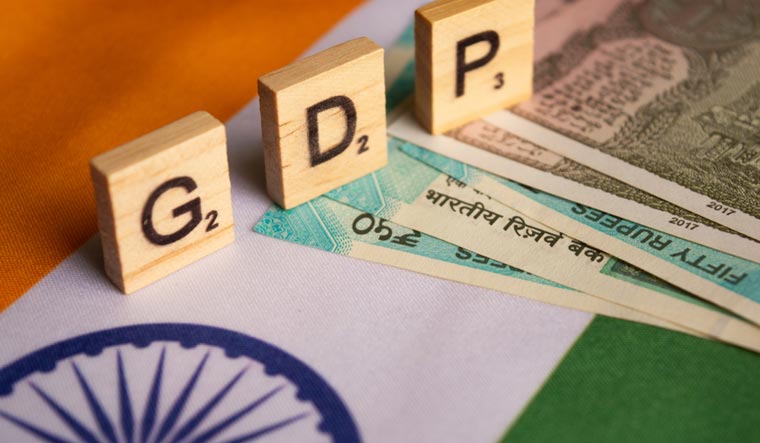 Its been over two years since the first cases of COVID-19 were reported. But, the pandemic continues to cast a shadow on global economy. Despite, the second wave of the COVID-19 that hit hard in April-May 2021, India's GDP grew 20.1 per cent in the June quarter and 8.4 per cent in the September quarter. But, the emergence of the new Omicron variant has once again cast a shadow of uncertainty on the growth.

Several states have imposed a few restrictions on services-related activities, while many offices have also moved back to work from home. Domestic airline passenger traffic too has dropped, which is expected to delay the sector's recovery.

In the backdrop of the resurgence in COVID cases and continued supply shortages in areas like semiconductors, economists have now revised their GDP growth forecasts.

With the third wave rapidly spreading, the voluntary pullbacks and state restrictions are starting to bite. The third wave has led to the Nomura India Business Resumption Index falling to 109.9 for the week ending January 9 from 119.8 during the prior week.

From a direct standpoint, the restrictions are likely to delay the recovery in the services sector, which even prior to the third wave, was still trailing pre-pandemic levels by 12 percentage points. Previous pandemic waves have led to supply-side disruptions and a flare-up in inflationary pressures, which tend to persist even after the wave ends, adding another headwind to households’ balance sheets.

The third wave will adversely affect growth in January-March 2022, although the loss in momentum should be much less than during the second wave and largely concentrated in services for a shorter duration. Accordingly, we lower our Q1 GDP growth forecast to 3.2 per cent from 5.2 per cent. On a financial year basis, we now expect GDP growth of 8.7 per cent in the year ending March 2022, down from 9.2 per cent, and 7.8 per cent in FY23, down from 8.2 per cent.

After having witnessed a sequential improvement in the second quarter of FY '22, due to pent-up demand, it appears that the growth rates in the third and fourth quarters need a downward revision. An apparent third wave, rising international crude oil prices, mineral products, steadily increasing costs of raw materials and freight rates, disruptions in semiconductor supply, and coal and power supply are likely to slow down the growth momentum.

For the full fiscal, we expect agricultural activities to be resilient as usual, while the manufacturing and services sectors will bear the brunt, if the current situation prolongs further. Our GDP estimates for the current fiscal have been revised to 8.5 to 9.0 per cent as against our earlier estimate of 10 per cent.

The implicit GDP growth of 5.6 per cent for second half of FY2022 built in by the NSO (National Statistical Office) does not factor in the evolving impact of Omicron. Our sense is that after a 6.0 to 6.5 per cent rise in Q3 (Oct-Dec) FY2022, the GDP expansion is set to slip below 5.0 per cent in the ongoing quarter.

The widening restrictions triggered by Omicron will thwart the nascent recovery in the contact-intensive services. Amid the ongoing uncertainty, we currently peg the impact of Omicron on GDP growth in Q4 (Jan-March) FY2022 at around 40 bps, posing a mild downside to our FY2022 GDP growth forecast of 9.0 per cent.