Centre likely to be less ambitious about fiscal deficit

The COVID upsurge is threatening the economic recovery 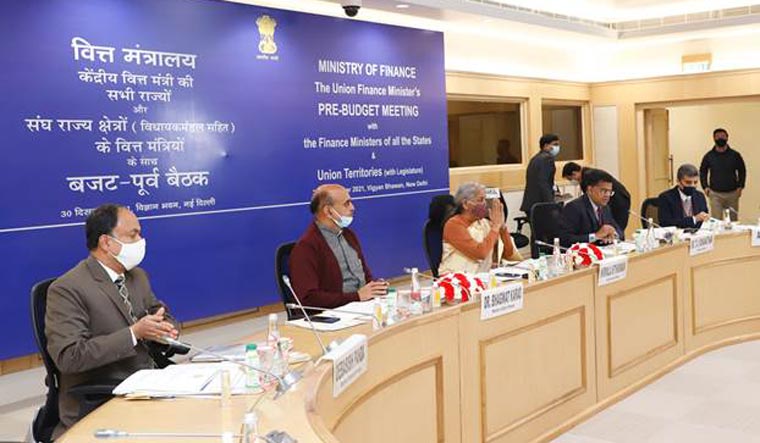 Trends in the North Block in the run-up to the Union Budget on February 1 indicate that the target for limiting fiscal deficit in financial year 2023 is likely to underwhelm.

Fiscal deficit refers to the money the government spends more than it actually makes. Reports suggest that India would only be aiming for a less ambitious target of around 6.3 to 6.5 per cent fiscal deficit for the upcoming year. Like the present financial year’s target of 6.8 per cent forced by post-COVID compulsions, this indicates that a full-fledged recovery and ‘business as usual’ on the economy front still remains a chimera.

“With expenditure so far only at 60 per cent of budgeted level, any expenditure spill-over into next year, ongoing deliberations on GST rates and revenue-sharing with states beyond July 2022, any support measures in the context of the current COVID wave and, hopefully, a continued thrust on capex will all be key fiscal factors in FY23,” says Sreejith Balasubramanian, economist - fund management at IDFC AMC.

Blame it on Omicron, if you will.

A faster-than-expected recovery after the deadly second wave back in the summer and consistently improving business recovery indicators like spike in GST revenues, exports and jobs had raised hopes that next year’s budget would set some healthy parameters as far as fiscal deficit is concerned. This had led to hopes that the fiscal deficit this financial year might actually be only 6.6 per cent (as Ind Ra rating agency suggested), an improvement over the budgeted target of 6.8 per cent.

However, the present surge in infections led by the new Omicron variant seems to have put paid to all that. Till infections began to surge up again in end-December and all indications pointed to a Third Wave, there was optimism that Centre spending could kick into top gear in the last quarter, giving a fillip to the economy.

Calculated as a percentage of GDP, rules stipulate that fiscal deficit should remain within 3 per cent. Quite obviously this limit was thrown to the winds once the pandemic hit and the economy tanked — as the government came out with a spate of stimulus packages running into lakhs of crores in an attempt to resuscitate it, even as tax and other revenues plummeted.

The fiscal deficit had shot up to 9.4 per cent last financial year (2020-21) thanks to the pandemic, and though last year’s budget had set a realistic target of 6.8 per cent, there were hopes until last fortnight that the nation could do better because of the improving scenario. Now, everything depends on the severity of the present wave of infections.

But Balasubramanian says all is not lost, and that just like the revival we saw in the last two waves, things could improve faster than anticipated. “Although there could be some consolidation in the headline deficit, execution, quality of spending, quantum of state spending too and thus the inclusive medium-term growth it generates will remain vital.”