737 MAX were grounded around the world after two fatal crashes 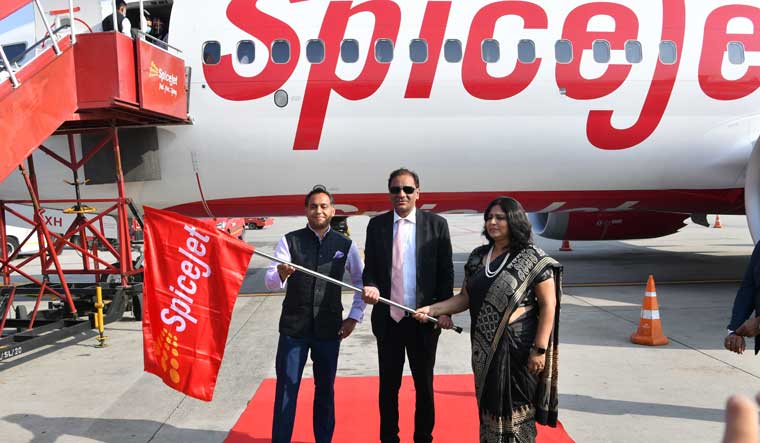 SpiceJet restarted operations of its Boeing 737 MAX aircraft, the backbone of its passenger fleet, after around two-and-a-half years. 737 MAX, considered to be one of safest aircraft, were grounded around the world after two fatal (Ethiopia and Lion Airways) crashes.

To reinstil the passengers' trust in the safety of the aircraft, SpiceJet owners, their families, along with Civil Aviation Minister Jyotiraditya Scindia, boarded the 737 MAX aircraft in a special flight from New Delhi to Gwalior.

The carrier currently has 13 Boeing 737 MAX aircraft and 205 more planes have been ordered, the delivery of which will start in December.

"After the intense scrutiny this aircraft has gone through, I can say with full confidence that it’s the safest aircraft to fly,” said Ajay Singh, chairman and managing director, SpiceJet.

"With passenger traffic picking up and the government allowing airlines to operate at full capacity, our new planes will allow us to expand our network ahead of the busy travel season and play a major role in our future expansion," he said.

The 737 MAX is the most environmental friendly aircraft as it uses up to 20 per cent less fuel than older 737s. "With significant cost saving capabilities, we expect a significant reduction in our operating costs improving our bottom line," Ajay Singh said.

It is believed that the noise level in the aircraft is 40 per cent less compared to other passenger aircraft.

SpiceJet also announced that in these aircraft, broadband service will be available, but voice call will be disabled.

Since the Federal Aviation Authority's (FAA) un-grounding in November 2020, more than 175 of 195 global regulators have opened their airspace to the 737 MAX. Thirty-two airlines have returned their fleets to service and flown over 235,000 commercial flights, totalling more than 575,000 flight hours.

The MAX can fly up to 3,500 nautical miles which is approximately 19 per cent more than 737-800 enabling the airline to fly to newer destinations.

Last week, the airline has entered into an agreement with the US-based aerospace company Boeing to settle outstanding claims related to the grounding of 737 MAX aircraft and its return to service.