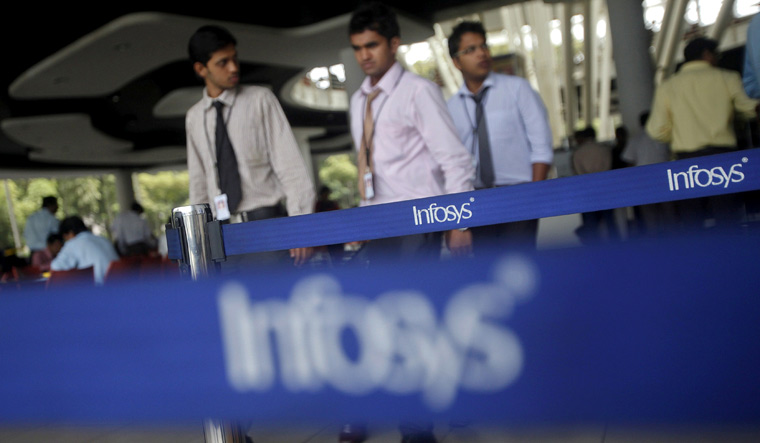 As the Indian IT services firms get ready to post their quarterly results, experts are expecting healthy top line performance led by a robust demand environment and deal wins. It is expected that some of the tier II IT services companies will continue to outpace tier I IT companies in terms of growth. As per experts from Motilal Oswal, tier I companies are expected to deliver revenue growth between 3.9 per cent and 6.9 per cent Quarter on Quarter (QoQ) in constant currency (CC) terms while tier II companies will have a wider growth band (4.9-10.5 per cent in QoQ CC). The report highlights that future outlook is also expected to remain positive for Indian IT firms.

As per the Motilal report, Infosys is expected to raise its FY 22 revenue growth guidance, while HCL Technologies should see an improvement in its growth trajectory to low teens. Commentary on medium term growth will be a key monitorable. It is also expected that the demand environment will be strong and sustainable with continued spend on digital and cloud adoption. Infosys is expected to lead organic revenue growth within tier I IT companies with more than 5.7 per cent QoQ CC growth on an organic basis. On the other hand, Wipro should be able to deliver 6.9 per cent QoQ reported growth. This will be followed by Tata Consultancy Services with more than 4.2 per cent QoQ CC growth.

It is also expected that there would be a dip in margins for most companies on the supply side pressures (attrition and hiring), along with a wage hike impact. Among the major IT companies, TCS may report an expansion in margin while Wipro will have the highest erosion on account of a wage hike and the impact of the Capco acquisition. IT services companies will continue to hire across and hiring will remain high as companies try to fulfill demand and back fill growing attrition, which will be a key focus area for investors. Analysts at Motilal Oswal expect that tier I IT companies are better placed to absorb the supply pressure, given their capabilities with regard to training employees in newer skills.

During the Q 2, tier I IT services companies are expected to deliver a Profit After Tax (PAT) growth of 12 per cent YoY and 1 per cent QoQ. TCS and Infosys are expected to report a YOY PAT growth of 16 per cent and 9 per cent respectively. The growth for HCL Technology is expected to be subdued on account of a YoY dip in margin. The Motilal Oswal report also observes that double digit top line growth should be sustainable in the medium term. Additionally, there will be large deals fuelled by full scale digital transformation, higher spends on cloud migration by large corporates.

The Q 1 results of major Indian IT services players like TCS, Infosys and Wipro were positive and boded well for the sector. The beginning of the Q1 result season was made by TCS which reported a 29 per cent year-on-year rise in consolidated profits in the Q1 of the FY 2021-22. This was followed by Infosys whose revenues grew 4.7 per cent QoQ to $3.78 billion in the Q1 which was also the decade's best Q1 growth for the IT major. Wipro also reported a 35.6 per cent jump in its consolidated net profit to Rs 3,242.6 crore for the Q1 quarter. For IT major Infosys, it was the best Q1 growth in the last decade. The revenue growth guidance for FY 22 E was increased to 14-16 per cent in constant currency terms than the earlier guidance of 12-14 per cent.