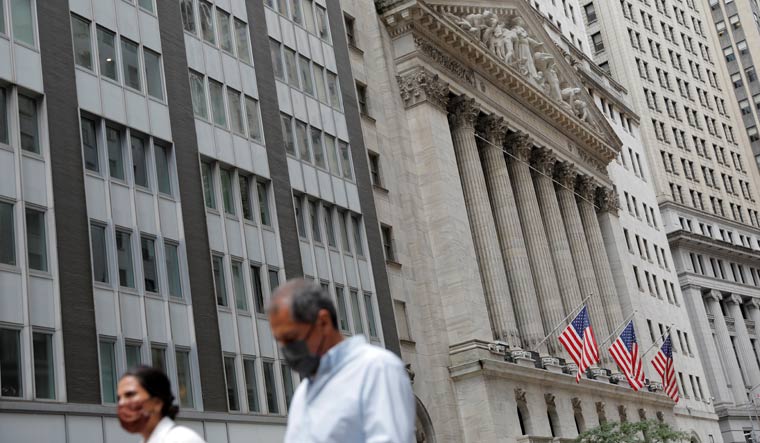 Major stock markets around the world, from the Dow Jones in the US to the Nikkei in Japan recovered after a resurgence in the COVID19 cases in many markets led to a carnage in stocks earlier this week.

On Wednesday, the Nikkei index in Tokyo rose nearly 160 points or 0.6 per cent and in London, the FTSE100 gained 105 points or 1.5 per cent. Other major indices like the CAC40 in Paris and Germany’s DAX were also trading in the green. This followed massive gains overnight in US stocks; the Dow Jones Industrial Average and Nasdaq Composite Index had surged over 1.5 per cent.

On Monday, stocks around major markets had crashed, and the slump had continued in many markets on Tuesday too as concerns rose that a sharp rise in cases of the delta variant of the coronavirus would derail the nascent global economic recovery.

The Dow Jones and S&P 500 had plunged 2 per cent and 1.6 per cent respectively on Monday. India’s benchmark BSE Sensex had closed 0.7 per cent lower on Tuesday, after a 1 per cent plunge on Monday, tracking the sell off globally. India’s stock markets are closed on Wednesday due to the Bakri Id holiday.

Whats led to a rebound in global markets now, even as COVID19 cases continue to rise?

Analysts at US investment bank JP Morgan felt that there was potential for stocks to climb given the US economic recovery.

“We remain constructive on equities and see the latest round of growth and slowdown fears premature and overblown,” the analysts were quoted by multiple agencies as saying. The JP Morgan analysts have raised their S&P500 target for the year-ending 2021 to 4,600 from 4,400.

Elsewhere, in Japan, investor sentiment was boosted on Wedesday by a strong growth in the country’s exports, suggesting demand was picking up in major markets. Japan’s exports in June surged 48.6 per cent year-on-year, a fourth straight month of growth.

Back home, data released over the past week suggests mixed trends. Consumer inflation marginally eased in June, although its still above RBI’s comfort zone. The index of industrial production rose 29.3 per cent in May. Also, we are in the midst of the first quarter earnings season, which will drive specific stocks and sectors.

Results announced thus far have been on expected lines; a low-base driving year-on-year growth, while there is a sequential impact as there were restrictions in many states over April and May to curb the second wave of COVID19.

“The Q1 result season has so far been in-line to better than expectations – leading to sector/stocks specific action – which is likely to continue in the near-term as well. Also, it may provide investors with some insights into the scale of economic recovery through the management commentaries,” noted Siddhartha Khemka, head – retail research, Motilal Oswal Financial Services.

Over the past one year, a huge fiscal and monetary stimulus globally has driven huge inflows into equity markets. Lower interest rates in India too have helped fuel a huge retail investor frenzy into stocks. But, with inflation raising its head in many markets, there is growing expectation that central banks will begin tightening their monetary policies in coming quarters.

Domestic markets also face headwinds from a potential third wave of COVID19, according to Khemka.

“It would be a tough fight between the bulls and bears in the coming days and one needs to remain watchful of possible movement in either direction,” he said.

So far in July, foreign portfolio investors have pulled out Rs 7,217 crore from India’s equity markets according to data from depositories, which has also added to the downward pressure on stocks. Overall in calendar 2021, FPIs still remain net buyers to the tune of Rs 53,127 crore.

Jitendra Gohil, head of India equity research at Credit Suisse says that while the near-term indicators are looking a “little stretched” for equities, the medium-term outlook remains “attractive.”

“We continue to expect some profit booking, especially by the foreign investors,” said Gohil.