The first round of discussions took place on Friday afternoon 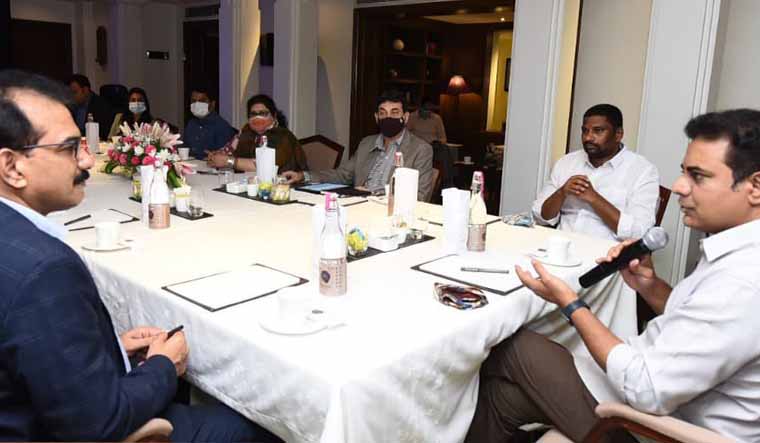 Telangana Industries Minister K.T. Rama Rao took to Twitter today to announce that the Kitex Group has agreed upon a Phase-I investment of Rs 1,000 crore within a span of two years in the textile industry for the project ‘Textile Apparel’ in the Kakatiya Mega Textile Park in Warangal.

“Delighted to announce the entry of KITEX group, world’s 2nd largest manufacturer of kids apparel into Telangana with an initial investment of ₹1,000 Cr,” K.T. Rama Rao tweeted. “They’ve chosen KMTP, Warangal for their factories. My gratitude to Mr. Sabu M. Jacob, MD of KITEX group on a quick decision.”

The Telangana government put their best foot forward to attract investments from the Kerala-based Kitex Group and outdo competitors from rest of the country.

A six-member delegation from garments-giant Kitex, head by Chairman Sabu M. Jacob, were flown into Hyderabad by a chartered flight arranged by the Telangana government. They were accompanied by officials from Telangana industries department. The entire exercise, to impress the group to invest Rs 3,500 crore in the state, was spearheaded by K.T. Rama Rao, who is also the son of Telangana Chief Minister K. Chandrashekar Rao.

The first round of discussions took place on Friday afternoon between the delegation members and the officials and minister of industries. According to sources, K.T. Rama Rao explained the steps taken to achieve ease-of-doing business in the state. The minister also spoke on the progressive industrial policies of the state and also the state’s focus on the textile sector. The officials had also given a presentation as to why the state is the best place for expansion plans of the group.

Later, the Kitex group members spoke on their requirements and shared their plans. The discussions covered the incentives and other forms of support that can be provided by the administration and also the employment aspect.

In a rare gesture, K.T. Rama Rao played host to the visitors during lunch. The members experienced a taste of Telangana hospitality as sumptuous food was served and the minister indulged in some casual conversation with the senior members of Kitex. Jacob and other representatives of the group were presented with a memento and a shawl by the minister.

Post lunch, a chopper was waiting for the team. They were taken to Kakatiya Mega Textile Park in Warangal. This was one of the options shown to the team.

“It is a fantastic site,” said Sajeev, a member of the delegation who said the group is yet to take a final decision. “The discussions are not over yet.”

The second round of discussions began post 6.30pm between the officials and the delegation members. Telangana has put forward a tailor-made plan for Kitex and are hoping for a positive outcome.

“We have given them multiple options and not just the textile park,” said Jayesh Ranjan, Principal Secretary, Industries, Telangana.

A formal announcement by the Kitex Group is expected before the team leaves for Kerala on Saturday.