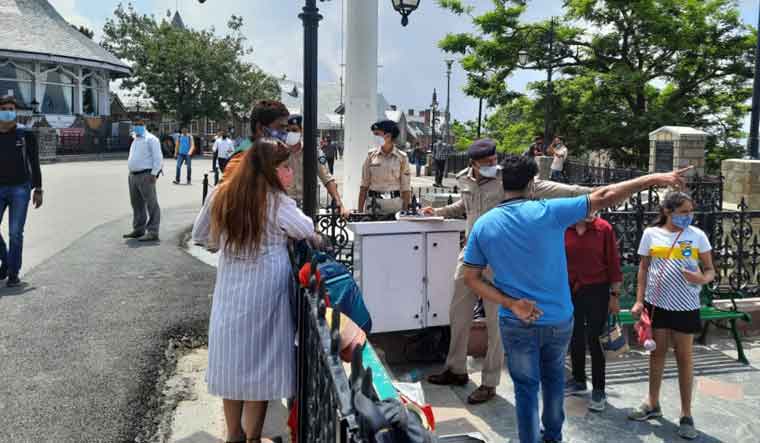 Virender Datta’s business as a tourism promotional marketer had him hobnobbing with foreign travellers and giving them the choicest recommendations, all in the backdrop of some of the best known tourist spots in the country. The apocalyptic pandemic all but decimated his line of work. “It’s like a bomb fell on us out of the blue. It’s been one and a half years now, and I am just sitting at home staring at the four walls and Sultan, my doggie.”

Harinder Yadav*, native of a village near the industrial hub Dharuhera on the Rajasthan-Haryana border, used to eke out his living driving his Innova ferrying tourists across the golden triangle circuit of Delhi-Agra-Jaipur. However, the overnight national lockdown, preceded by the cessation of international flights, turned him into a pauper overnight. Left without any income to support his family and even to pay for the loan on his tourist cab, he attempted suicide. While the worst was averted, Yadav has, by all accounts, turned into a mental wreck.

A prominent Delhi restaurateur had no option but to shut down his outlet and send staff home when the lockdown was announced with just a four-hour notice. Stuck at home due to the ‘world’s strictest lockdown’, he could return only weeks later. The sight that greeted him was way beyond dust and cobwebs an unattended place might have attracted. “Food materials stored, from meat and poultry to cheese and veggies had gone bad, and the whole place was overrun by mice and fungus,” says an insider.

These are just a few out of the hundreds of thousands of human tragedies that have played out in India’s once shining travel, tourism and hotel industry sector after the body blow of Covid-19. These high contact sectors are, perhaps, the worst affected among all businesses, and the worst is far from being over.

“Tourism industry has practically fallen off the cliff,” quips Jose Dominic, co-founder, CGH Earth, which runs resorts on the west coast of the country as well as Lakshadweep. “Covid-19 has exposed (its) vulnerability.”

“The hotel industry…(and) all travel destinations are bearing the brunt of the ongoing crisis,” points out K.B. Kachru, chairman emeritus of the Radisson Hotel group in South Asia and vice president of the Hotel Association of India (HAI). “The fight for survival has only started.”

The numbers starkly illuminate the extent of the devastation. Loss of revenue last year could be up to a massive Rs 30,000 crore, according to estimates by Hotelivate, a Gurugram-based hospitality consultancy. But this applies only to the 1.4 lakh branded hotel rooms—hotel rooms in the unbranded category are more than 25 times that figure.

And that is just hotels. Once you cover the entire gamut—from aviation, taxis, chartered buses, travel agents, hotel execs, restaurateurs, service staff, tour guides, hawkers, masseurs, and even arts and crafts performers who catered to tourists—the losses grow manifold. A Centre for Monitoring of Indian Economy (CMIE) estimate put job losses in this field during the second wave alone at 42 lakh.

Business travellers, one of the two biggest money spinners in the travel and hospitality sector, have switched over to Zoom calls and virtual pitches—about 60-70 per cent hotels in India are in the business category. The other, most lucrative category, foreign tourists, vanished overnight as the government stopped regular international flights and issuance of tourist visas right during the first wave of the coronavirus. The ban on regular flights was just extended till the end of July.

The Union government finally came out with some sector-specific relief measures in the last week of June. It included waiving of visa fees for the first 5 lakh visas to be issued, as well as easy loans for tour guides and travel operators. Government estimates claim that the total scale of the package is Rs 6.3 lakh crore.

However, not many in the sector were enthused. “Free visa has a symbolic message that we have the confidence to welcome visitors,” said M.P. Bezbaruah, former tourism secretary and secretary general of HAI. “We hope (it) will be logically followed by measures to make the industry recover.”

Datta is a bit more blunt. “It’s a loan you are offering to people whose livelihood has been wiped out and have no money to pay existing loans and EMIs, with no prospect for revival for another couple of years. How does that help?” he retorts. “And what’s the point of waiving off a few dollars (a tourist visa to India for one month costs just $25, or around Rs 2,000) when flights are still banned and there is no clarity on vaccination requirements, and several states have their own different restrictions on entry?”

Different rules in different states complicate matters. While some states like Himachal have removed most restrictions, those like Goa still insist on a negative RT-PCR test result for entering the sunny state, at least till the end of July. Kerala, another big tourist hub, is still battling high caseloads and positivity rate.

Some states did come forward with relief packages. Both Maharashtra and Karnataka have accorded industry status to the hotel industry, a move that will help in getting easier loans and better rates on electricity and property tax. In fact, moves by states like Rajasthan (liquor licence fee slashed to 75 per cent), Kerala (electricity charges waived off for six months) and Karnataka (property tax slashed by half for this year) have been more on the lines of what the industry has been demanding, rather than dole outs or ‘relief’ packages.

While the measures by states help, the sector is still looking up to the Centre for decisive steps. “According ‘industry’ status (by the Centre) will serve as the biggest turning point,” argues Kachru, whose wish list includes extension of loan moratorium, loan restructuring, waiving of tax liabilities for a period by municipal and state authorities, and a salary subsidy for hotel employees till next year “to provide the cushion of comfort to the beleaguered sector.”

But with reality providing cold comfort, hotels have embarked on thinking outside the box. With the unlock process seeing a quick pick-up in domestic travellers going for staycation (taking a hotel room in one’s own city to chill out and get away from the usual) and weekend getaways near ones own city, the leisure side is taken care off.

“In June, we have seen a growth on the leisure side,” points out Nipun K. Vig, vice president (operations) of the Sarovar hotel chain, which runs nearly a hundred hotels across India. “But (business) hotels in metros are still bleeding,” he adds.

The business properties have embarked on a spate of innovations. These include food deliveries, sanitised sections for cricket teams and training sportspersons, offering smaller, tailor-made packages for weddings, packages for WFH (work-from-hotel, not work-from-home, where the hotel provides a quiet room and data connectivity through the day with meals thrown in, with the option of rest of the family or friends joining in for a celebratory dinner and stay for the night). There are upgrades and freebies thrown in for those with ‘fully vaccinated’ certificates, as an added incentive.

Sarovar, starting with Bengaluru, offers what it calls a relocation package, where returning employees who had left town when work-from-home came into force are given a package to stay for a few days while their house is cleaned and set up to move into.

“We focused on what the consumer needed (and) undertook a number of initiatives,” points out Kerrie Hannaford, vice president (commercial), Accor hotels (India & South Asia). Accor’s brands include the likes of Novotel and ibis, as well as marquee names like Fairmont Jaipur and Sofitel Mumbai. The two luxury properties are already seeing occupancies increase, including staycation crowds enticed by the attractive post-pandemic pricing and all-in deals on offer.

Another unconventional money spinner has been film shooting—many hotels have rolled out the red carpet for production crews from Bollywood as well as those making web series’ for the likes of Netflix and Amazon Prime. “They stay for a good 20 days or sometimes for months, and promise to be a good revenue proposition,” says Vig of Sarovar group.

Every rupee coming in through whatever out-of-the-box adaptations in these tough times count, and hotels are hoping it will help until room occupancies rise. Before Covid, room rents brought in about 60 to 70 per cent of hotel revenues, but now the skew has shifted in favour of money coming in from food (including deliveries), alcohol, wedding banquets, etc, as room occupancies remain low except in leisure destinations.

Another skew may be harder to overcome. While all hotels are focusing on domestic leisure travellers, who take weekend getaways and staycations to tide over the situation, the question is whether that would be enough. Industry sources estimate that one foreign tourist spends an average seven times more than a typical domestic traveller/hotel guest. So all this vigour and focus on the domestic traveller may still not be enough when it comes to the bottomline, especially for travel agencies, tour operators, guides, etc.

Besides, the trail of devastation wreaked amongst the smaller, unbranded hotels shows no sign of abating. While the general belief is that bigger chains and branded hotels will be able to hold on, the shutting down of Hyatt Regency, the glitzy five-star near Mumbai airport, shows just how bad the situation is.

But all is not lost yet. “Calamity can be put to good use,” says Jose Dominic. “Willingness to change is higher during a crisis, and this is the right moment for us to re-orient the industry towards responsible tourism. The priority should be to change the fundamental development parameters of our society at large and put greener, cleaner systems in place.” For, as he says, “A great place to live should make a great place to visit.”