Reiterates that the policy discriminates Indian users from that of Europe 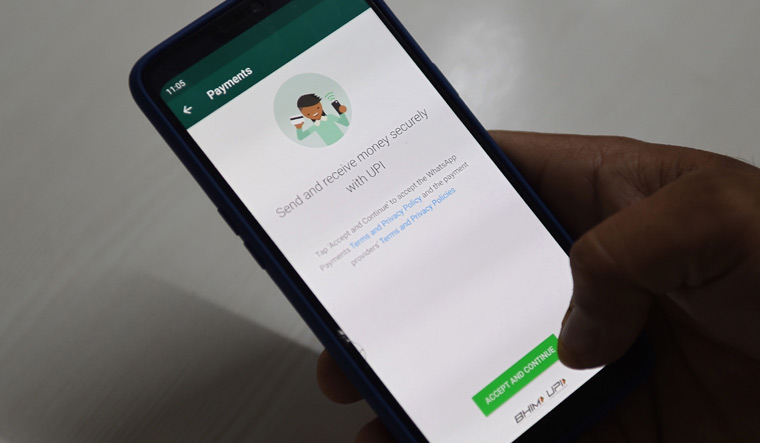 A user checks the Facebook's WhatsApp application payment feature on his mobile phone, in Faridabad | AFP

The Centre has yet again asked Facebook-owned messaging service WhatsApp to withdraw its controversial new privacy policy. The Ministry of Electronics and Information Technology, in a communication on Wednesday, stated that deferral of the privacy policy beyond May 15 does not absolve WhatsApp from respecting the values of informational privacy, data security and user choice for Indian users.

Owing to resistance from various quarters, WhatsApp had earlier claimed that it officially deferred its new Privacy Policy beyond May 15, 2021. The Meity has given seven days time to WhatsApp to respond to the notice. "...if no satisfactory response is received, necessary steps in consonance with law will be taken," news agency ANI reported citing government sources.

The Ministry has also taken the same stand in the Delhi High Court, where this matter is sub-judice.

Taking up the issue of discriminatory treatment to Indian users vis-à-vis users in Europe, the ministry stated, “As you're doubtlessly aware, many Indian citizens depend on WhatsApp to communicate in everyday life. It is not just problematic, but also irresponsible for WhatsApp to leverage this position to impose unfair terms and conditions on Indian users, particularly those that discriminate against Indian users vis-à-vis users in Europe," the sources said.

The ministry has drawn attention of WhatsApp as to how its new privacy policy is a violation of several provisions of the existing Indian laws and rules. "The Indian government will consider various options available to it under laws in India," the sources said.

The communication from Meity came only days after the Centre, during a hearing of several pleas challenging WhatsApp’s new privacy policy, told the Delhi high court that it views the new privacy policy of WhatsApp as a violation of the country’s information technology laws and rules and sought directions to the social media platform to make it clear whether it was confirming to the same.

WhatsApp told the bench that while its new privacy policy has come into effect from May 15, it would not start deleting accounts of those users who have not accepted it and would try to encourage them to get on board.

The platform said there was no universal or uniform time limit after which it will start to delete accounts as each user would be dealt with on a case-to-case basis. The bench had then issued notices to the Centre, Facebook and WhatsApp and sought their stand on one of the pleas by a lawyer who has claimed that the new policy violates users’ right to privacy under the Constitution.