Easier to transport oxygen from surplus states than to enhance capacity 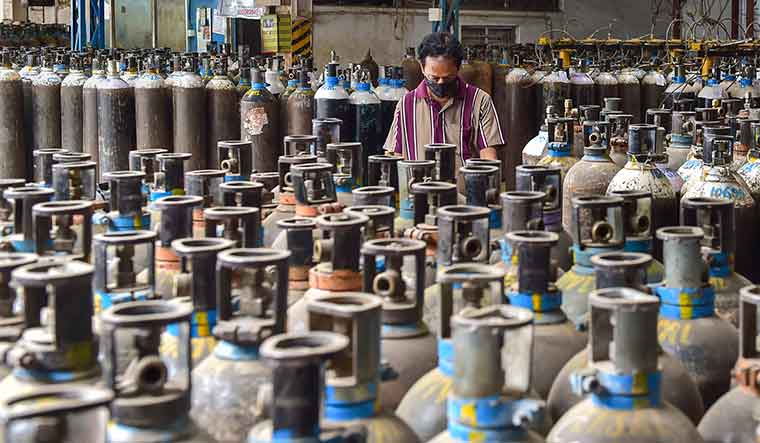 Though COVID-19 patients are gasping for oxygen amidst a shortage of supply, enhancing oxygen production capacity won't be an easy task for gas firms.

Experts and firms speaking to THE WEEK point to the challenge of enhancing oxygen capacity in existing plants, as it would be time-consuming and equivalent to setting up a new plant altogether.

The solution, they feel, is to transport oxygen from places where production outpaces demand to places where demand outpaces supply.

Experts such as Siddharth Jain, the Director of INOX Air Products—one of the largest producers of oxygen in the country—feel that the major problem is due to the excess supply of oxygen in faraway markets such as Odisha and Jharkhand, and excess demand in states such as Maharashtra, Gujarat and Madhya Pradesh. Demand has also started picking up in Delhi and Uttar Pradesh due to the surge in cases.

“The issue is that supply is excess in places that are very far away from the demand. We are trying to find a way to transport the same. The ministry of railways has launched the oxygen express, which is moving oxygen by rail, which has not happened before. The first oxygen express was flagged off, which went from Mumbai to Vishakapatnam to pick up material from the Vizag steel plant and bring it back to Mumbai. In many places, due to the increasing demand, it is a kind of a hand-to-mouth situation," he said.

"We are managing this. Cases are very high in Maharashtra and Gujarat now. I hope the cases come down in those states when demand in other states goes up. It is an all-time high demand for medical oxygen demand in the country. In normal times, India had an excess supply of medical oxygen,” remarked Jain.

Supplies of medical oxygen are centrally allocated and monitored by the Empowered Group EG II, headed by the Secretary – DPIIT (Department for Promotion of Industry and Internal Trade) mandated by the government of India. The Empowered Group II under DPIIT has members that are nominated from all the states along with all Major Oxygen Manufactures, AIIGMA, PESO, Ministry of Road Transport and Indian Railways.

Jain said his firm had been running all its units round the clock since the start of the pandemic to ensure continuous production and uninterrupted supply of medical oxygen to over 800 hospitals nationwide. Due to this, he says they have been able to fulfil over 60 per cent of the total medical oxygen demand in India. Currently, this company has a production medical oxygen production capacity of 2,000 tonnes per day across 44 manufacturing locations across the country. They also have a dedicated fleet of Vehicle Tracking System enabled 550 Transport Tanks and more than 600 drivers.

On a pan-India basis, this firm has installed more than 110 medical oxygen tanks with more than eight lakh litres of storage capacity.

Besides this, small firms like Bhuruka Gases limited primarily cater to medical oxygen requirements in a few southern states—and have faced optimum demand for a fortnight. The company says that it has no unused storage and the complete production is being utilised.

“We manufacture 65 tonnes of oxygen per day out of which 80 per cent goes for medical use. However it is very difficult to enhance the production capacity and it is equivalent to setting up a greenfield plant which may be a very time-consuming affair,” Subramani G, production manager, Bhuruka Gases Limited told THE WEEK.

Interestingly as per the latest report by CRISIL, the lower oxygen supplies is expected to temporarily impact five sectors as with the demand for medical oxygen soaring, the central government has barred industrial use (except by nine sectors) from April 22, 2021. Demand for medical oxygen is estimated to have rocketed five-fold in the second week of April versus pre-pandemic levels as COVID-19 infections took off. The report says that a higher supply of medical oxygen will save lives, but will have a bearing on some sectors.

“The disruption in the supply of oxygen for industrial use would temporarily impact the revenues of small and mid-sized companies into metal fabrication, automotive components, ship breaking, paper, and engineering. These typically do not have captive oxygen plants and source their requirement through merchant suppliers for operations such as welding, cutting, cleaning and chemical processes,” said Gautam Shahi, Director, CRISIL Ratings.

The CRISIL report too mentions that setting up an air-separation plant or importing oxygen requires significant lead time and involves relatively prohibitive cost, so is not a viable option. That will leave them more vulnerable compared with larger peers. The report observes that oxygen is consumed by industry in two ways such as onsite, and merchant sales. Onsite is through captive plants for process-driven industries (including the nine sectors exempted by the government), which account for 75-80 per cent of oxygen manufactured in India. The balance, 20-25 per cent, is supplied through merchant sales (called liquid oxygen) through cryogenic tanks and cylinders. The healthcare sector consumes 10 per cent of merchant sales, and others the rest.

The report points out that the disruption in oxygen supplies for industrial use will be for six to eight weeks. Besides, affected sectors can partly manage their oxygen requirements with inventory. A prolonged and intense second wave that curtails oxygen supply to industries for a longer period than expected will exacerbate downside risk in affected sectors. The impact is likely to be greater for companies in Maharashtra, Delhi, Rajasthan, Madhya Pradesh and Gujarat, where medical oxygen demand has increased multiple times due to high COVID-19 caseloads.