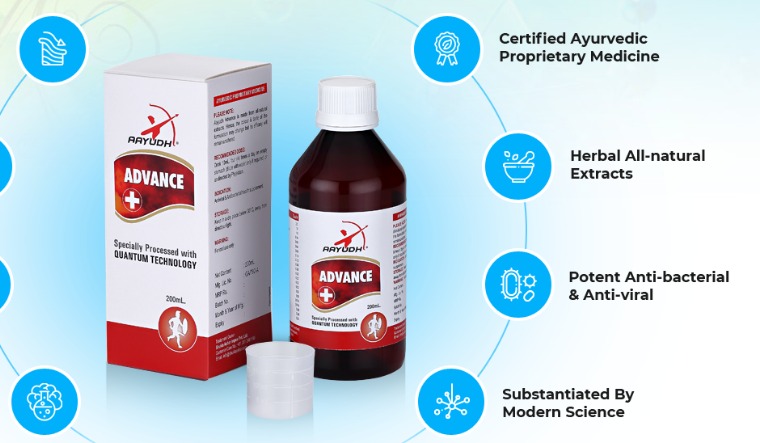 A show-cause notice has been issued to a Rajkot-based ayurvedic drugs manufacturer for allegedly making a misleading claim that its product 'AAYUDH Advance' is the "first clinically tested medicine for COVID-19 management and treatment", an AYUSH Ministry statement said.

The company has also claimed that its product is "three times better than Remdesivir and that 'AAYUDH Advance starts where vaccines stop'”.

Acting on a letter from the AYUSH Ministry, the show-cause notice has been sent by the joint commissioner (Ayurveda) of the Food and Drug Control Administration of Gujarat.

The drugs policy section of the AYUSH Ministry directed the Ayurvedic Licensing Authority of Gujarat to initiate strict action against the company that has made such misleading claims, the statement said.

In a letter issued on April 18 by S.R. Chinta, Deputy Adviser of the drug policy section of the AYUSH Ministry, the joint commissioner of the Ayurvedic Drugs Licensing Authority of Gujarat was asked to take strict and immediate action against M/s Shukla AsharImPex Pvt Ltd, Rajkot.

The letter from the ministry pointed out grave misconduct on the part of the company regarding drug formulation-related claims.

Citing the ayurvedic rule book, the letter said the formulation was "violating section 33 EEB which puts a particular drug in 'misbranded, adulterated and spurious' category".

The ministry's letter has also mentioned that the said drug was violating section 33EED for not having the therapeutic value as claimed by the manufacturer, causing public grievance.

It also cited rule 158-B and said its conditions were not fulfilled. This rule deals with licensing of 3(h) formulation and requires that "the ingredients should be part of Authoritative Books mentioned under the First Schedule".

Both the panels had rejected the product as well as the clinical trial as it did not follow the principles of ayurveda and study protocols.

The company has claimed that this product is "a liquid formulation comprising 21 different types of plant-based extracts. Ayurvedic scriptures report these ingredients to be effective and safe to be used for human consumption".

To this claim, the ministry's letter mentions that some of the ingredients in the formulation of the product in question are not mentioned in the ayurvedic classical text as prescribe in the first schedule of the Drugs and Cosmetics Act, 1940, hence it cannot be termed as ayurvedic drugs under rule 3a and 3(h)(i) of the said legislation.

The AYUSH Ministry had asked for an action-taken report by the joint commissioner (Ayurveda) of the Gujarat Food and Drug Control Administration, acting on which the state authority issued a show-cause notice to be replied in seven days.