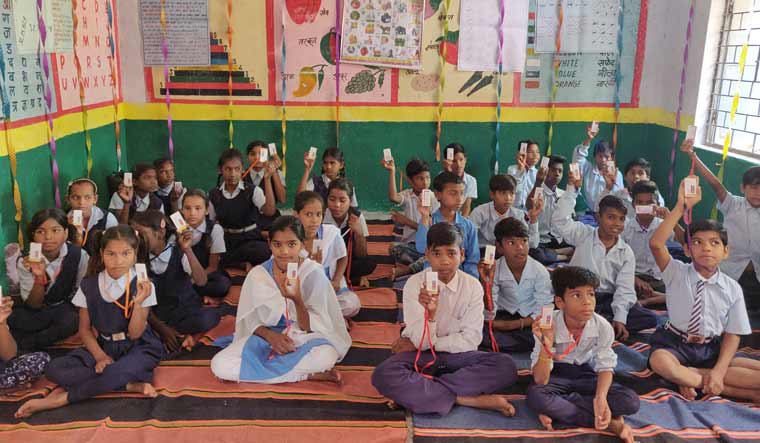 Children at a Taghive class | Sourced

Picture this: A teacher asking a question to a classroom full of students. As a child, it was a fantasy where each and every student in the class gets to answer the question on a hand-held device (like the audience poll in KBC). No 'ayes' or 'nays' and blurting out, like in Parliament.

However, such a quick classroom-poll may not be a fantasy anymore. TagHive, a Samsung-funded startup, has developed what it claims to be the world's first clicker-based response system for classrooms.

The clicker enables students to respond to questions asked in a classroom environment. The teacher can track each student's response and progress on the app installed on her/his phone.

The clicker, coupled with an at-home learning app Class Saathi, helps teachers and parents to keep track of each student's progress. While the clicker is used by students, the app is for teachers, parents and admins. The content or the questions can be generated by the education department or even teachers themselves.

The pandemic year of 2020 was also the year of edtech startups. As lives and movements came to a standstill, the unthinkable happened with virtual classrooms replaced physical classrooms. Even as the pandemic was being touted as the perfect launchpad for the edtech sector in India, many rued the loss the rural students incurred due to lack of infrastructure and connectivity.

That's where TagHive stands different. The solution does not require internet or electricity to work, but only a smartphone for the teacher.

After being incorporated in 2017, the company was initially into smart toys with smart tags. Later, the company, founded by Pankaj Agarwal, an IIT Kanpur graduate with an MBA from the Harvard Business School, shifted focus and identified government schools in India to create more value. Despite the prolific mushrooming of edtech startups across the country, an immersive, hassle-free online learning experience is still a fantasy for a majority of rural students in the country.  Agarwal's aim was to create something that did not require internet connectivity.

The mobile and desktop-enabled smart and low-cost classroom technology solution is currently being used in more than 400 K-12 public schools in South Korea. In India, the app was introduced in government schools in Uttar Pradesh and Madhya Pradesh a year before the pandemic began in 2020. The response was encouraging as the company claims that attendance in these schools had gone up by 10 per cent in that year.

"Class Saathi is a lens that lets us now see things that were not possible earlier. It gives schools and governments tangible data to evaluate and assess the educational system," Agarwal adds.

TagHive comes with the mission to reduce dropout rates in schools. "The dropout rates widen as we go from grade 1 to grade 8. Our focus is to reduce the gap in the early stage," Agarwal says.

The clicker-based approach helps to close the loop of formative assessment, self-learning and monitoring through a data-driven approach, he adds.

The Class Saathi solution and app is a scalable and low-cost investment for schools as the same bag of clicker solutions can be used across classes.

The company, which had to slow down its expansion owing to the pandemic, is currently in discussion with state governments like Jharkhand and Rajasthan and private schools.

Ask Agarwal about the challenges of India's education system and he becomes an eternal optimist. "The toughness of the Indian education system prepares you for a tough life. But there are so many people who get ground out of the system. The content of education is quite old in our country. The best thing to do is to inspire or motivate kids to study," he explains. True to TagHive's motto.