The bank aims to reach 8,000 branches in five years 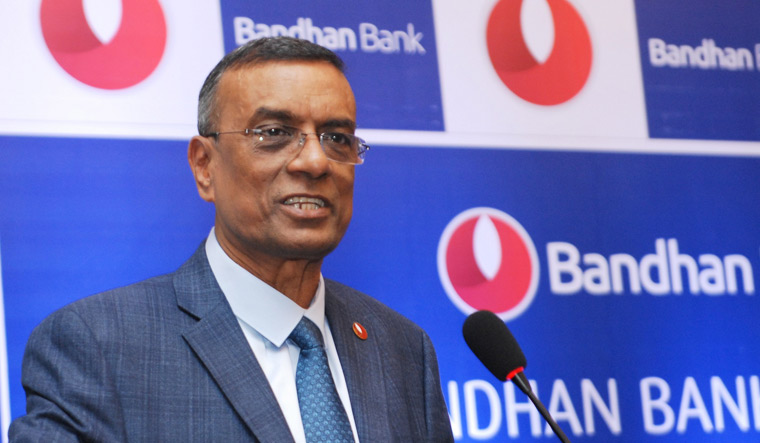 Private sector lender Bandhan Bank, which is also the country’s largest micro-finance lender, is strengthening its network beyond its traditionally strong areas of east India, and looking ahead majority of its branches will be opened in non-east areas, according to Chandra Shekhar Ghosh, its MD and CEO.

Bandhan Bank currently has a nation-wide network of 5,197 branches, including 1,107 branches and 4,090 micro-credit banking units. But, eastern region still accounts for 45 per cent of its banking outlets and 11 per cent are in the north-east. East and northeast also account for 67 per cent of the bank’s retail deposits.

In the next five years, the lender aims to reach 8,000 branches, Ghosh told THE WEEK in an interview.

“In the last two years, we have opened more branches in non-east and in the new expansion planned also 90 per cent of the branches will be in non-east areas. But, our focus on rural will continue,” said Ghosh.

In the third quarter for intance, southern region comprised of 41 per cent of the new banking units expansion, while 21 per cent were in central and 20 per cent in western India.

The expansion beyond its core markets will bode well for Bandhan Bank, given the ongoing challenges in states like Assam, where its a large player.

In Assam, for instance, there are 45 micro-finance lenders, with a portfolio of Rs 12,000 crore, of which Bandhan contributes 55 per cent, according to Emkay Global Financial Services.

Last year, micro-finance institutions, including Bandhan, saw their business impacted in Assam, due to protests against the Citizenship Act and National Register of Citizens. Now, the recent passage of The Assam Microfinance Institutions (Regulation of Moneylending) Bill, 2020, which aims to curb coercive lending practices is leading to some confusion among MFIs as to how things will pan out. Also, reported loan waiver talks among political parties is adding in to the uncertainties.

Several provisions of the bill include restriction on deployment of collection agents, collection from borrowers only at gram panchayat offices, minimum three-month loan repayment moratorium in case of natural adverse events among other things.

Ghosh said on Thursday that the collection efficiency in Assam has come down to 78 per cent between January 1-16 from around 88 per cent in the December quarter and the bank has become very conservative there.

“We are very conservatively doing fresh lending. Secondly, we are also going to meet customers and try to understand their views,” said Ghosh in a separate interaction with reporters on Thursday.

In Bengal, its collection efficiency dropped to 89 per cent from 90 per cent, while it was stable at 94 per cent in rest of India.

Ghosh says Bandhan will remain a big player in the micro-lending business in future too. But, as it expands as a universal bank, it is strengthening its retail lending vertical too, with a focus on offering customers a bouquet of personal loans, vehicle loans, two-wheeler loans, gold loans etc.

Its housing finance business, which it got through the acquisition of Gruh Finance from HDFC is also being scaled up across Bandhan’s bank branches. It has also started offering third-party products such as mutual funds and insurance.

“We started in a couple of branches. Now, in all bank branches, we are introducing third-party products. Gradually, it will come to the other (micro-banking) vertical also. We currently have partnerships,” said Ghosh.

Under current regulatory structure, a bank can’t undertake insurance or a mutual fund business, except through a subsidiary or a joint venture set up for the purpose. So, while Bandhan Bank, can’t directly start mutual fund or insurance business, its promoter Bandhan Financial Holdings does have plans for the same and the board of the promoter entity is focusing on those plans, noted Ghosh.

As a part of its growth plans, the bank recently created a new vertical called the Emerging Entrepreneurs Business, through it which hopes to attract unbanked and underbanked entrepreneurs.

In November, an internal working group of the central bank recommended that well run large non-banking finance companies, including those owned by corporates, may be considered for conversion in to banks, a suggestion that has come in for a lot of criticism.

Ghosh said that given India’s size, there was no doubt that more banks are needed. But, there has to be a strong focus on governance and a need to continue with a holding company ownership structure, he added.

“I hope the regulator puts in place a very strong capital structure. Further, it should also improve monetary supervision by their various departments, which is happening now. In the future, this can be further strengthened,” Ghosh said.

Post the results, Bandhan Bank’s shares closed down 5.2 per cent at Rs 341.05 on the BSE on Thursday.