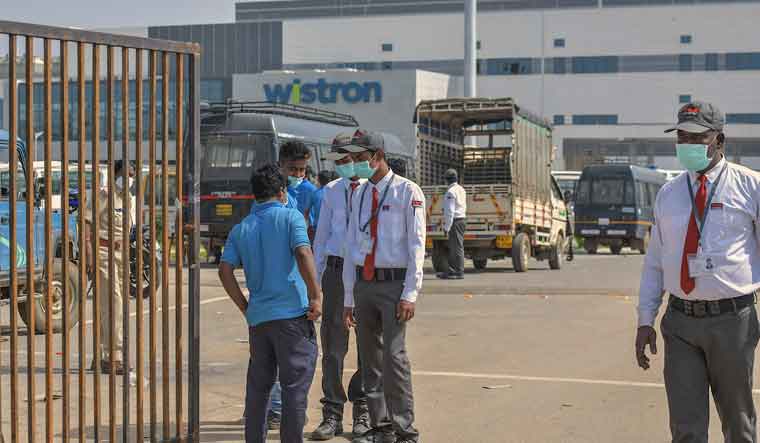 [File] Security personnel stand guard outside Wistron Infocomm Manufacturing India Pvt Ltd, where a section of workers went on a rampage at its facility manufacturing Apple iPhones and other products over non-payment of promised wage, at Narasapura area in Bengaluru | PTI

Apple said on Saturday it had placed contract manufacturer Wistron on probation and would not give the Taiwanese firm new business until it took corrective actions following lapses at its plant near Bengaluru. Apple's statement came soon after Wistron released a media statement admitting to unethical working conditions at its Narasapura facility.

"Since the unfortunate events at our Narasapura facility we have been investigating and have found that some workers were not paid correctly, or on time. We deeply regret this and apologise to all of our workers. This is a new facility and we recognise that we made mistakes as we expanded. Some of the processes we put in place to manage labor agencies and payments need to be strengthened and upgraded," Wistron stated. The iPhone manufacturer has sacked its vice president Vincent Lee, who oversees its India business.

The company added that it has started an employee assistance programme for workers at the facility. "We also set up a 24-hour grievance hotline in Kannada, Telugu, Tamil, Hindi and English to ensure all workers can voice any concerns they may have anonymously," the company added.

Apple, which mandates strict ethical working conditions for its supply partners, was quick to launch an internal probe into the vandalism at Wistron's plant last Saturday. "Our preliminary findings indicate violations of our Supplier Code of Conduct by failing to implement proper working hour management processes. We have placed Wistron on probation and they will not receive any new business from Apple before they complete corrective actions," Apple stated.

Apple employees and independent auditors hired by Apple have been working around the clock to investigate the issues which occurred at Wistron’s Narasapura facility, the company added.

The Cupertino-based company has a strict supplier code of conduct and follows up on any reports of violations. In 2019, it interviewed more than 52,000 supplier employees as part of its supplier assessments.

Apple, in its supplier code of conduct, states that suppliers must meet all legal requirements relating to wages and benefits, including paying accurate wages in a timely manner. It prohibits use of wage deductions as a form of disciplinary measure and states that all use of temporary and outsourced labour shall be within the limits of the local law.

In November, Apple had suspended new business with one of its suppliers Pegatron Corp after labour violations were reported.

Besides the iPhone, Wistron also manufactures IT products for Lenovo and Microsoft, among others.

Wistron is one of the 16 entities to have received approval for incentives under the government's production linked incentive plan. Currently, iPhone XR and iPhone 11 are being assembled by Foxconn in Chennai, and iPhone 7 by Wistron in Bengaluru. The Kolar facility assembles the latest version of the iPhone SE.