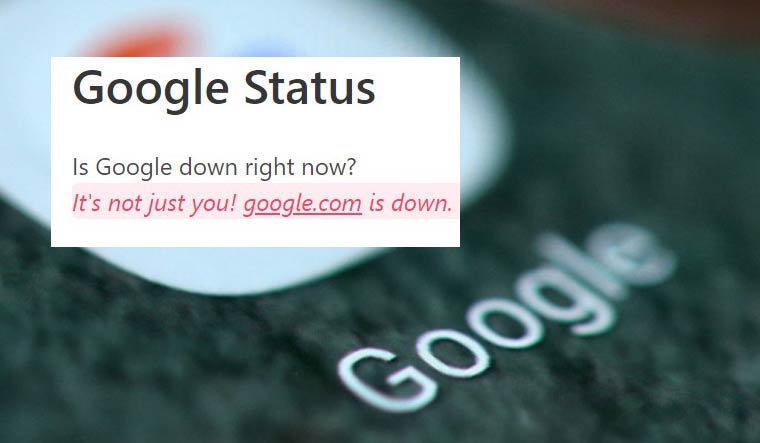 For many in the work-from-home era, it was like a horror movie to see the red error message: “Gmail is temporarily unable to access your contacts. You may experience problems while this persists.”

A rare global outage of several of Alphabet’s key services—Google, Gmail, YouTube and Drive—was reported on Monday. According to TechCrunch, Google products like Maps, Adwords and Adsense, Google Pay, Google Home, Nest and Chromecast were also reporting problems. At first, Google said it was investigating reports of an issue with Gmail. "The affected users are able to access Gmail, but are seeing error messages, high latency, and/or other unexpected behavior," the company said.

Multiple reports have since confirmed that services have been resuming, with Google’s workspace status dashboard showing all services as functional. According to the dashboard, "the problem with Gmail has been resolved." Google added, "We apologize for the inconvenience and thank you for your patience and continued support. Please rest assured that system reliability is a top priority at Google, and we are making continuous improvements to make our systems better."

Earlier, Google stated that while Gmail service has already been restored for some users, the company expect a resolution for all users in the near future. "Please note this time frame is an estimate and may change. The affected users are able to access Gmail, but are seeing error messages, high latency, and/or other unexpected behavior."

According to DownDetector.in, user reports indicate Google has been having problems since 12:54pm IST. Many users reported being able to access services like YouTube by entering incognito mode.

The incident has highlighted the all-encompassing role Google plays in many people's lives. Some users spoke of being unable to control the lights in their room as they were synced to Google Home. There were also reports that some schools were delaying the start of the day or declaring a holiday altogether due to the outage: Several schools rely on Google Meets to conduct classes virtually amid the COVID-19 pandemic.

I’m sitting here in the dark in my toddler’s room because the light is controlled by @Google Home. Rethinking... a lot right now.

The planet after 2 minutes without YouTube, Google and Gmail. #YouTubeDOWN pic.twitter.com/W139LcPXbG