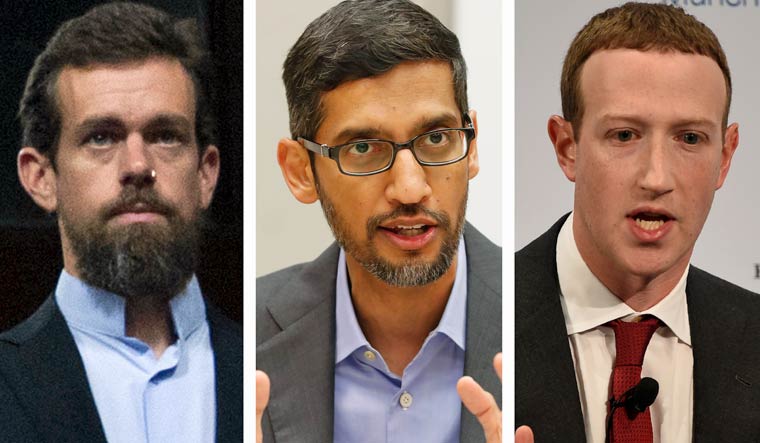 "Who the hell elected you and put you in charge of what the media are allowed to report?" angry US Senator Ted Cruz animatedly asked Twitter CEO Jack Dorsey during Wednesday's congressional hearing. Just days ahead of the US presidential elections, Republican and Democrat lawmakers grilled the CEOs of Twitter, Facebook and Google in a hearing about decades-old federal laws known as Section 230 that spare social media sites from being held liable for the posts, photos and videos they allow or remove, protecting internet companies from legal liability for content generated by its users.

The senators on the Commerce Committee questioned the chiefs of the tech giants over their content moderation policies. While Republicans focused on disinformation and the 'censoring' of Donald Trump, Democrats accused their rivals of politicising the hearing, while also questioning the mechanics of the platforms that promoted content they deemed divisive

Some lawmakers demanded more transparency while others sought explanations on a few specific cases in which content was removed or labeled by platforms. Though the hearing was meant to focus on a crucial law, known as Section 230, that protects the companies' ability to moderate content as they see fit, Senators strayed from the brief and confronted the executives on other topics, including antitrust, misinformation about voting and election interference.

The hearing also saw Democratic senators slamming their Republican counterparts on the timing of the hearing, which comes less than a week before the US election. "This is bullying and it is for electoral purposes," Democrat's Brian Schatz said. "Do not let the United States Senate bully you into carrying water for those who want to spread misinformation."

The exchange between Cruz and Dorsey was particularly interesting. At one instance, Cruz was seen asking Dorsey if his company had the ability to influence elections. Dorsey replied in the negative saying Twitter was just a "part of a spectrum of communication channels that people have." However, Cruz, a frequent antagonist of tech companies and Twitter in particular, was in no mood to buy Dorsey's explanations.

He concluded by shouting at Dorsey: "Mr. Dorsey, who the hell elected you and put you in charge of what the media are allowed to report and what the American people are allowed to hear, and why do you persist in behaving as a Democratic super PAC silencing views to the contrary of your political beliefs?"

The hearing came as social media companies have been bracing for an onslaught of misinformation. In recent days, Facebook and Twitter have both taken action to slow the spread of some content, bringing about allegations of bias, censorship and even election interference. The tech CEOs and several lawmakers appeared by video.